“The question remains: What does Section 230 currently mean? Many advance an overly broad interpretation that in some cases shields social media companies from consumer protection laws in a way that has no basis in the text of Section 230.” 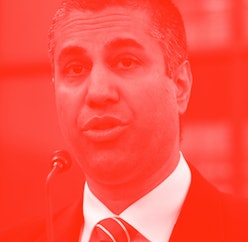 Just a day after Twitter and Facebook limited the spread of a disputed New York Post story about Joe Biden's son and Ukraine, Ajit Pai — the chairman of the Federal Communications Commission (FCC) — has called for regulating social media. Pai is specifically eyeing Section 230 of the Communications Act, which essentially informs and shapes how openly people talk on social platforms.

Facebook and Twitter's moderation and editorial decisions in targeting the Post story has agitated many conservatives, reigniting the claim that Big Tech has a conservative bias. A concern that has been repeatedly refuted.

In his Thursday statement, Pai said that the officials within "all three" branches of the federal government had severe issues with the "prevailing interpretation of the immunity set forth in Section 230 of the Communications Act."

Section 230 in the crosshairs — Donald Trump himself has explicitly called for limiting the power, via petition, set by Section 230 with an executive order in May. The provision centers on free speech on the internet. As such, it states, "No provider or user of an interactive computer service shall be treated as the publisher or speaker of any information provided by another information content provider." In September, the president specifically took issue with a troll image related to Senate Majority Leader Mitch McConnell, in which he can be seen wearing a Soviet-era military uniform.

"Why does Twitter leave phony pictures like this up, but take down Republican [or] conservative pictures and statements that are true?" Trump tweeted at the time. "Mitch must fight back and repeal Section 230, immediately. Stop biased Big Tech before they stop you." On Thursday afternoon, Trump then tweeted that Section 230 "created a monster" out of Big Tech. While Pai is clearly not using such charged terms, the chairman is on the same page with Trump. He notes that the United States Department of Commerce is concerned with "ambiguities in Section 230" referring to Trump's order from May. Biden has also expressed concerns about Section 230.

"As elected officials consider whether to change the law, the question remains: What does Section 230 currently mean?" Pai stated. "Many advance an overly broad interpretation that in some cases shields social media companies from consumer protection laws in a way that has no bias in the text of Section 230. The Commission's General Counsel has informed me that the FCC has legal authority to interpret Section 230. Consistent with this advice, I intend to move forward with a rulemaking to clarify its meaning."