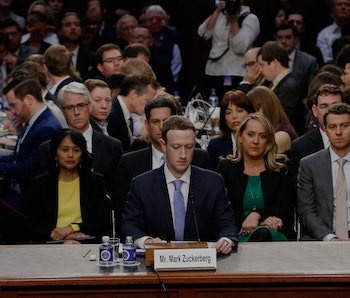 Starting in the middle of October, Facebook's ostensibly independent Oversight Board is expected to get to serious work. Earlier this year, Facebook announced that it would give this board at least $130 million in funding to run its operations but also decidedly noted that it was still very much in charge.

According to a CNBC report, the Oversight Board will look into Facebook content through its content management system and review critical posts accordingly. The move comes just weeks before the 2020 presidential election and could help Facebook improve its impression on critics who believe that the current political ad policy in place is still very open for propaganda and disinformation for those who would happily choose to exploit it.

A spokesperson for the Oversight Board told CNBC:

We are currently testing the newly deployed technical systems that will allow users to appeal and the Board to review cases. Assuming those tests go to plan, we expect to open user appeals in mid to late October.

The representative also noted that "building a process that is thorough, principled and globally effective takes time and our members have been working aggressively to launch as soon as possible."

A Facebook representative told the publication that the company had been preoccupied with "helping" the board take off and added, "That has included finalizing a new software tool that allows members to securely access and review case information from anywhere in the world; and training them on our community standards and policy development processes."

The loophole remains — Facebook claims that the board will have independent reviewers from various professions, including law, academia, media, and other domains. These individuals from North America to Africa to Asia are said to be multilingual and trained experts on issues of human rights, free speech, ethics, content evaluation, and more. But it sounds less like a review board and more of a PR strategy to avoid accusations — repeatedly debunked — about conservative bias.

Despite creating its own board, Facebook remains in power. As Input previously reported, the board does not have permanent say over Mark Zuckerberg in that it cannot change Facebook's content policies. And this is where it becomes evident that the panel is more of a cosmetic change, less of a fundamental overhaul of Facebook's approach to commercials, posts, pages, and groups.

If indeed the board had any power, it would seriously reconsider Zuckerberg's phenomenally flawed ad policy for the race, which allows political campaigns to run ads — and make objectively false claims before millions of users — until only a week prior to the election day.