“These companies therefore need to ask themselves what type of platform they would like to be: one that earns money by allowing Holocaust denial to flourish, or one that takes a principled stand against it.”

Jakob Guhl, research coordinator at the ISD speaking to 'The Guardian' 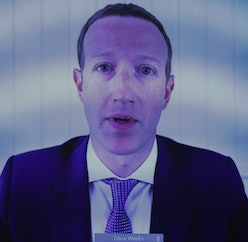 Facebook’s complex algorithms “actively promote” content related to Holocaust denial, according to a new investigation by the Institute for Strategic Dialogue (ISD). The U.K.-based counter-extremist organization set out to analyze the amount of Holocaust denial information — using the term “holohoax” as a starting point — posted on Facebook, Twitter, YouTube, and Reddit.

Though posts and groups denying the Holocaust exist on each of the analyzed networks, the information was by far most readily available on Facebook. The ISD found that Facebook pages related to Holocaust denial have a total of 366,068 followers and that, overall, the network’s algorithms allowed these groups to have a “snowball” effect and spread with ease because a visit to one prompts the service to recommend others.

It would be horrific enough to find out that Facebook allows Holocaust denial content to be posted across its platforms and turns a blind eye, but discovering it enables it to thrive is wholly unacceptable.

What sets Facebook’s Holocaust denial content apart is that it's able to thrive on Pages created ostensibly for other content. Of the 36 Pages found to have hosted Holocaust denial content, the ideological focus of only nine was found to be far-right in nature. The others ranged from anti-Zionist groups to Islamist groups and pro-Palestine groups.

The algorithm is complicit — Facebook is also set apart from its fellow networks in the ways in which its algorithms recommend content. At their core, these algorithms are written to promote content to each user based on their history on the platform. Unfortunately, this methodology also works when a user is interested in hate speech — Facebook then recommends similar hate speech in the future.

ISD researchers call this a “snowball” effect. After liking and following a few pages and groups related to Holocaust denial, a simple search for the term “holocaust” turned up suggestions for other, similar posts and groups. The result is the network actively promotes this harmful content to those who show even a passing interest in it.

“Facebook’s decision to allow Holocaust denial content to remain on its platform is framed under the guise of protecting legitimate historical debate,” said Jacob Davey, ISD’s senior research manager, “but this misses the reason why people engage in Holocaust denial in the first place.”

It’s obvious, based on the progress made by Reddit and YouTube, that it’s very possible to remove this content. And yet — as with political misinformation and climate change misinformation — Facebook would rather turn a blind eye or make excuses.

“We take down any post that celebrates, defends, or attempts to justify the Holocaust,” a Facebook spokesperson told The Guardian. “We also remove groups and pages that discuss Holocaust denial from recommendations and references to it in search predictions.”

Researchers at the ISD have proven that's categorically false. Whether because it’s disguised or carefully worded or by some other subterfuge, Holocaust denial information is slipping through and, indeed, being recommended.

For a little salt in the wound, Facebook says “In countries where it is illegal, such as Germany, France and Poland, this content is not allowed in accordance with the law." In other words, when its legally required to block Holocaust denialism it does so. Elsewhere, it chooses not to.