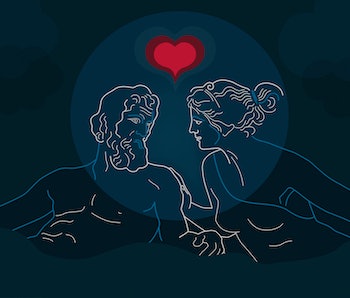 A fiery petition filed on Change.org claims that Facebook is apparently carrying out a campaign of censorship and strict morality on competing dating apps that support consensual casual dating as well as polyamory.

The call-out was filed by #Open's co-founder Amanda Wilson who says that Facebook's ad policies won't allow "'couple or group options' or apps that promote 'casual dating,' 'hook-ups,' 'affairs,' or 'mail-order brides.'" Wilson worries that this position stifles any possibility for #Open — a self-titled "sex-positive, kink-positive, and inclusive" dating app on both iOS and Android — to find more users. Here's what has been going down in e-Cupidsville.

Breaking #Open's heart — According to Business Insider, #Open's director of operations Maile Manliguis said that Facebook's platform could have boosted app exposure — like it previously has for Tinder, OkCupid, and other apps — but #Open's request to go live was summarily rejected on seemingly moral grounds. "Within two hours of submitting just the general application," Manliguis claimed, "we got kickback from Facebook saying that we were not approved because we offer couple and group options, and that puts an emphasis on sex."

It's complicated — At first glance, you might think Facebook is trying to position itself as the internet's arbiter of right and wrong. But in reality, it is marketplace competition — not morality — that defines the dating app game. At its core, apps like #Open pose direct competition to Facebook's own and rather flop of a dating service. Mark Zuckerberg's painfully awkward attempt at making romance viable for Facebook users has been met with regulatory disputes, mockery, and an icy lack of enthusiasm. New competition is the last thing Facebook needs.

Since it wouldn't be legally wise to openly say that it's curbing competition on its platform, Facebook seems to be using its ad policies as a self-righteous shield. If indeed it condemned infidelity, its commitment would be reflected in its dating service. After all, if you wanted to, you could easily cheat on your partner using Facebook's dating service by hiding your real relationship status. It's that easy.