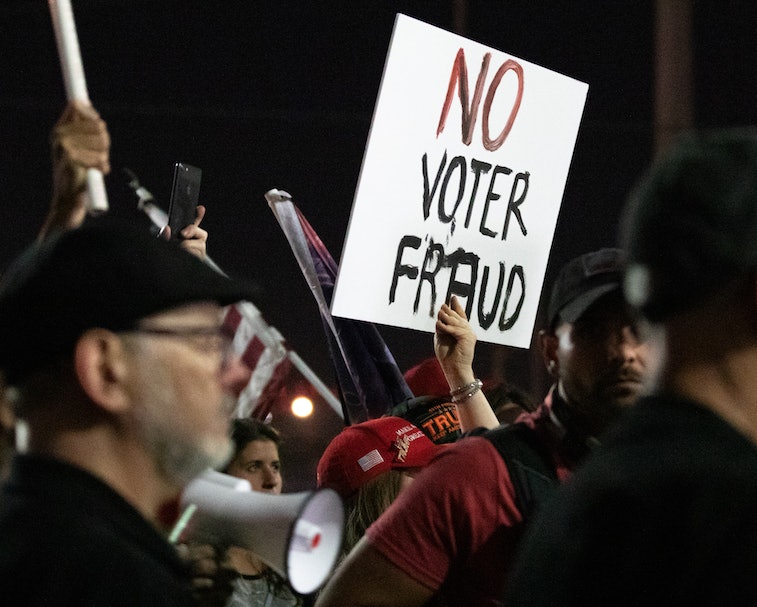 Despite multiple requests for admin assistance, a "Stop the Steal" Facebook group with over 300,000 members remains active and aggressively pushing election misinformation regarding the remaining, legal tallying of votes in multiple swing states.

Dangerous, untrue, and rapidly gaining ground — The group, run by a pro-Trump "not for profit social welfare organization" called Women for America First, is encouraging disruptions and protests to counter the final tallying of 2020 election votes, citing various lies and other assorted false information regarding voter fraud and alleged Democrat conspiracies, as well as promoting event gatherings across the country.

"Democrats are scheming to disenfranchise and nullify Republican votes," reads the group's About section, despite the easily verifiable fact that votes continue to be counted for both political parties. "It's up to us, the American People, to fight and to put a stop to it."

Donie O'Sullivan, a reporter for CNN, stated on Twitter that the group is gaining roughly 100 new members every 10 seconds, while Ryan Mac, a Senior Tech Reporter for BuzzFeed News, tweeted that he reported the group hours ago, only to receive a response saying the situation was still "being assessed."

Rabbit holes of misinformation — This comes after reports earlier this week of Facebook's egregiously loose double-standards when it came to fact-checking Trump's allies and a damning internal survey of the company's employees regarding the social media platform's handling of the 2020 election.

While the company (after immense pressure) finally got around to banning all QAnon conspiracy groups last month, groups like Stop the Steal provide easy rabbit holes for similar misinformation to reach users. "I know a lot of you are awake to a certain movement that supports POTUS, a movement that the msm [mainstream media] has been trying to discredit," reads one post, which includes a screenshot to the Parler account @StormIsUponUs, one of the main QAnon conspiracy spreaders. "This gentleman below is an incredible source for truth," he adds.

As it stands, even if Stop the Steal is shut down today, without proper monitoring and actual follow-through from Facebook, groups like it will continue to pop up and provide easy means of disinformation, potential violent organizing, and radicalization into the fringe pro-Trump death cult that is QAnon. It's with this in mind that we heartily endorse logging the hell off of that site. Once you're reported Stop the Steal, that is.