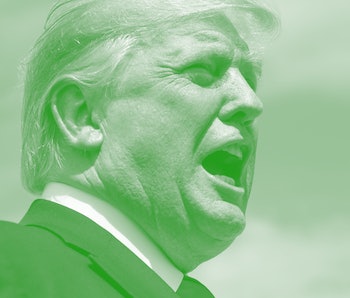 Social media platforms have become epicenters of misinformation, and Facebook in particular doesn't appear too eager to fix that. On July 21, former foreign policy spokesman for Hillary Clinton, Jesse Lehrich, tweeted a Donald Trump ad still up on Facebook. The ad, as the BBC pointed out, misleads its audience into believing Ukrainian unrest is anti-police violence happening right in the United States.

It even shows insignia belonging to the now-disbanded "Internal Troops of Ukraine" if you look close enough. But none of that has compelled Facebook to take the ad off the platform. The company told BBC that it has no plans to take action. Apparently the ongoing boycott by multiple brands — and a subsequent damage control move to introduce labels — has taught Mark Zuckerberg nothing.

Key background — In the ad originally created by Evangelicals for Trump and posted to the president's Facebook page, where he has at least 30 million followers, Trump can be seen standing next to various law enforcement officials. In the image placed right next to this photo, you can see a protester in a physical quarrel with an armed guard.

The caption for the post says, "Join the movement today and ensure religious freedoms are kept as a top priority!" And the ad's juxtaposed image of Trump next to police officers and a protester presumably attacking a guard came with an ominous warning: "Public safety versus chaos and violence." What's conveniently missing from this entire spectacle is the fact that, as Lehrich pointed out, the photo was taken in Ukraine in 2014.

Key audience — The ad has heavily featured in Florida and Texas targeting users over the age of 55, BBC reported based on Facebook's internal assessment.

Egregious misinformation runs freely on Facebook. In the past, the network has allowed misleading content around climate change, vaccination, COVID-19, cancer, and more to reach broad audiences. On the political frontier, Facebook has stumbled over ads openly calling for violence against Black Lives Matter protesters, including a post of the same nature from Trump himself. This toxic mix of falsehood and controversy is only bound to get worse unless Zuckerberg finally decides to sincerely care about the issue — for once.