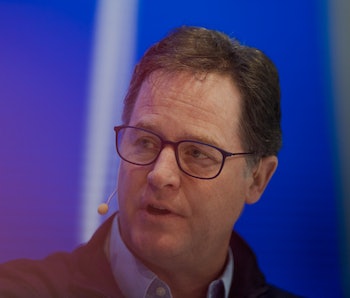 Perhaps Facebook CEO Mark Zuckerberg's worst nightmare has come true: Joe Biden will be the next President of the United States. In response, Facebook is reportedly planning an apology tour of sorts to make up for all the things President-elect Biden has attacked it for doing wrong.

According to the Financial Times, the social media company will further expand its efforts to combat misinformation about the coronavirus pandemic, and will encourage users to take a vaccine once it's approved. Facebook will also promote action on climate change and encourage users to share content about the Paris climate agreement, which Biden intends to re-join. The company's vice president of global affairs, Nick Clegg, will be tasked with getting a meeting with the new administration as he's been friendly with Biden in the past.

Charm offensive — Biden was a harsh critic of Facebook throughout the election, attacking it for allowing soon-to-be-former President Donald Trump and other Republicans to disseminate false information about coronavirus and mail-in voting, among other things. It has tried to clamp down following the election by extending its suspension of political ads and placing labels on posts that contradict the outcome of the election.

Still, many saw Facebook's hesitance to reduce the distribution of election misinformation (at least, not to the same degree as Twitter) as a move to hedge in the event Trump won reelection. Conservatives have consistently attacked social media companies over unsubstantiated claims of censorship, and Zuckerberg has tried to take a more hands-off approach than Twitter. Many of the people who use Facebook today skew older and predictably don't want conservative content removed.

Facebook has been in an impossible situation because it's attacked by both parties but for different reasons. Democrats, contrary to the Republicans, think that Facebook hasn't done enough to censor falsehoods, hate speech, and other damaging content. Breaking up the company, as some Democrats have advocated for, would give other social media companies a better chance of competing. Instagram accounts for upwards of a quarter of Facebook's revenue today — if it were broken away, the main Facebook platform would need to be cleaned up to entice younger audiences to come back to it.

It's possible that Biden will follow through with Trump's attempt to weaken protections afforded to social media companies that allow them to freely moderate content on their platforms. Under Section 230, these companies can remove dangerous content, but they aren't held liable if they miss a piece of content that leads to harm. Ending those protections probably wouldn't be the best idea, however, as it could result in social media companies needing to overcorrect and silence many people. Zuckerberg and Twitter CEO Jack Dorsey have both asked Congress for more guidance on what type of content should or shouldn't be censored on their platforms.

Profits over people — It's not surprising that a company like Facebook is shrewdly pivoting to adapt to its new reality under a Biden administration. For-profit companies always act in the interest of shareholders, which usually means aligning with whoever holds the reins of political power. Facebook shown little genuine interest in cleaning up misinformation on its platform (or at least its leadership hasn't) because that could push conservatives away — it's just accepting the reality that it may have to change if it wants to survive the new administration with its sprawling empire intact.