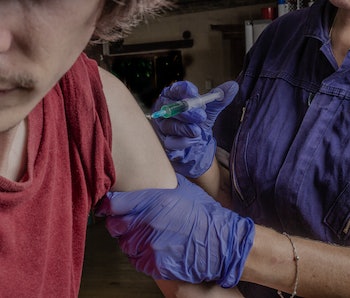 Now, in February 2021, Facebook is finally taking a stance against all vaccine misinformation on its platform. As anti-vaxxers are more resolved than ever about their conspiracy theories, Facebook is trying to get more people to trust the COVID-19 vaccines... and vaccines in general. The shift is added to the list of long-overdue policy changes Facebook started to make as soon as it realized a Democratic administration was on the horizon.

Okay, okay, we’ll do something about it — In addition to removing vaccine misinformation on Facebook and Instagram, the company will also aim to educate users on the various coronavirus vaccines and their rollout. Of course, as is often the case after a Facebook announcement like this, you can still find plenty of the allegedly banned content.

When Input searched for the anti-vaxxer accounts screenshotted above, Instagram surfaced reputable organizations like the Centers for Disease Control and Prevention, and we had to click “see all results” to get to the profiles. Once there, however, vaccine misinformation was still available, and many of the posts didn’t even have misinformation flags. Some even proudly displayed quotes from prominent anti-vaxxer Robert Kennedy Jr.

We also searched hashtags like #novaccine4me and #vaccineinjuryadvocate on Facebook, finding several posts on the app, but only a few on the website, and search results didn't display a specific number of posts available.

Even before this policy shift was announced, Facebook was having trouble keeping up with COVID-19 vaccine misinformation. Lawmakers have been putting pressure on the company to do better, but Facebook is in for a marathon to get ahead of a problem it gave such a massive headstart.

When you let anti-vaxxers thrive — Some people have legitimate worries about the COVID-19 vaccines regarding how quickly they were made, and Black and Latinx people have reasonable hesitance about the vaccine given this country’s history of medical racism. But anyone thinking this critically about the vaccines likely knows the benefits outweigh the risks.

The danger is where critical thinking goes to die: conspiracy theorists. Anti-vaxxers have sowed distrust in a medical marvel used for hundreds of years with profound effects on mortality rates and the growth of modern society. This pushback is all to avoid the incredulous claim of being microchipped by a mostly retired tech mogul while ignoring an actual, growing surveillance state infrastructure.

Anti-vaxxers have been allowed to form communities online for years without consequences, despite bringing literally back measles. Now, their beliefs may be so entrenched that some form of deprogramming may be the only path back to trusting science. But you know what? Facebook’s finally on the case, so we can all breathe a sigh of relief, right?