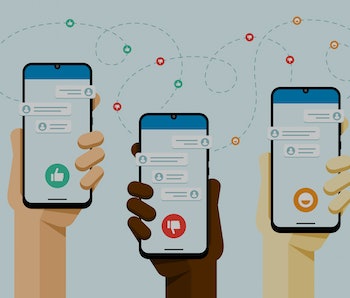 Facebook's post-election strategy seems to be as contentious as its pre-election approach. According to the New York Times, Facebook has reversed its algorithmic change which amplified news from authoritative sources on the News Feed. The premise of the strategy was to purge misinformation and conspiratorial theories from the timeline of Facebook users amid the 2020 presidential election. But that application was short-term, according to a Facebook representative.

"This was a temporary change we made to help limit the spread of inaccurate claims about the election. We're still ensuring that people see authoritative and informative news on Facebook, especially during major news cycles and around important global topics like elections, COVID-19, and climate change," Facebook spokesman Joe Osborne told the New York Times.

With this provisional measure, Facebook had boosted news sources like NPR, CNN, the New York Times itself, and other ostensibly impartial outlets. "Ostensibly" because the subject of whether a news outlet is entirely neutral is perennially changing based on readers' perception, editorial positions, which issues are amplified and which ones are downplayed, and other details — though data science could help us see where a publication leans. In contrast, outright politically partial outlets like Breitbart on the conservative side and Occupy Democrats on the liberal side were pushed back by Facebook's algorithm.

The strategy seemed to have won some Facebook employees over who, per the New York Times, asked the company to keep the "nicer news feed."

Prior to the 2020 presidential election, Facebook attempted to eliminate far-right-wing QAnon's conspiratorial movement from the network, and it was somewhat successful in its efforts. But as the New York Times notes, QAnon "superspreaders" are still active on Mark Zuckerberg's medium where they continue to publish false claims about election fraud, non-existent "micro chips" in COVID-19 vaccines, and how Donald Trump is supposedly being thwarted by Satanic followers in higher positions of power from saving the United States from eternal doom.

While some outsiders and even Facebook employees may think that the company's modus operandi is not exactly perfect and perhaps even counterproductive by being temporary, Facebook insists that its program is working. Ever since it made these pre-election changes, the company claims that hyper political posts have gone down.