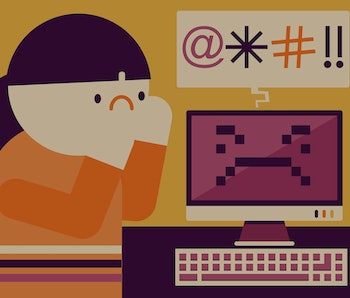 Facebook’s VP of Integrity, Guy Rosen, published a press release on Tuesday speaking to the company’s supposed progress in fighting hate speech on the platform. The release highlights a recent report from the European Commission about how hate speech is handled on various websites.

“We don’t allow hate speech,” the post begins in earnest. “Over the past few years, we’ve invested in new technologies and improved our processes to find and remove hate speech from our platform.”

The report, which is the fifth annual one completed by the EU, assessed how companies respond to hate speech on five axes: Total number of hate speech notifications, time of assessment, removal rates, feedback to users, and grounds for reporting hatred.

Meanwhile, the social network continues to facilitate the spread of conspiracy theories, misinformation, and calls for violence with its uneven and often lax moderation policies. The progress made by Facebook does not indicate what Rosen thinks it does.

Yes, Facebook has improved its numbers — Facebook is making some progress toward better responding to and removing hate speech from its platform. That much, at least, is true.

In his post, Rosen says Facebook’s safety and security teams have tripled since 2016. The company has also invested heavily in AI moderation technology. With such investments, it isn’t surprising that Facebook is able to respond quickly to hate speech flags.

But hate still thrives — Here’s the problem with Rosen’s logic: It simply does not account for the innumerable number of hateful posts that still live on the platform. The numbers Rosen is so proud of do not indicate the level of hate speech on Facebook — they only speak to how quickly Facebook is able to respond to flagged posts.

Hate thrives on Facebook because Mark Zuckerberg and other top leadership allow it to; because they refuse to do any more than the bare minimum in policing the social network. This problem is most evident when Facebook’s finances are involved: Ads and political posts are the worst offenders because Facebook makes money off them.

It's a pat on its own back from the same company that, when pressed to remove hateful posts by President Trump, refused to do so on multiple occasions. This call for praise comes from the company that allows politicians to pay to promote ads calling for the public to shoot protestors with AR-15s. It comes from a place where hate groups are allowed to congregate and plan.

Facebook can hire hordes of moderators and deploy fancy AI as much as it wants — it could respond to 100 percent of flagged posts within a day — and still hate will find life on the platform unless enormous changes are made to the company’s policies.