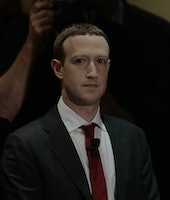 Mark Zuckerberg may present his social network as a platform where billions can create meaningful and beneficial bonds, but Facebook's content moderators have long criticized the endless presence of mentally jarring photos and videos they're faced with on the site. Horrific posts involving homicide, suicide, rape, theft, child abuse, and more pollute and stain the network.

It is such a prevalent internal rot that it has even entered the legal realm, where advocates have demanded better worker protections against mental stress, PTSD, fatigue, depression, and more. Now, the landmark case representing 11,250 moderators has resulted in Facebook officially agreeing to pay a total of $52 million to existing and previous content moderators, The Verge reports.

Finally, some reprieve — Reports of Facebook's pressure on and rather intense demands of moderators have long dotted the internet. In January, for example, Input reported that the company was holding its overworked and underpaid moderators to extremely unrealistic standards for workplace efficiency. For the record, annual salaries for moderators fall as low as as $28,800. They were being asked to log their bathroom breaks while auditors had carte blanche to review these workers, and add or subtract points from a worker's quality score.

The case against the company started even before these reports of impossible demands. In 2018, a former Facebook content moderator named Selene Scola filed a lawsuit against Facebook for developing, she said, a host of mental problems including PTSD while on duty. Scola claimed that Facebook had weak mechanisms in place for workers fielding multiple images of rape, murder, and suicide on the platform. In 2019, The Verge published an exhaustive report on the horrors faced by these nameless and unrewarded workers as they desperately tried to tackle abusive content on the network.

What the settlement involves — Under this settlement, Facebook has officially recognized the mental toll experienced by these moderators. As a result, every moderator will receive at least $1,000 while those diagnosed with a mental health condition could receive an extra $1,500 and counseling services. Those who received multiple diagnoses would be eligible for amounts up to $6,000. If moderators have documented proof of Facebook's negligence, they could receive as much as $50,000 in damages. The company has vowed to improve its psychological support for workers as well.

We are so pleased that Facebook worked with us to create an unprecedented program to help people performing work that was unimaginable even a few years ago. The harm that can be suffered from this work is real and severe.

Is this settlement going to effectively address Facebook's perennial content problem? In all brutal honesty, no. But it's a starting point. One that hopefully yields more guardrails and workplace protections.