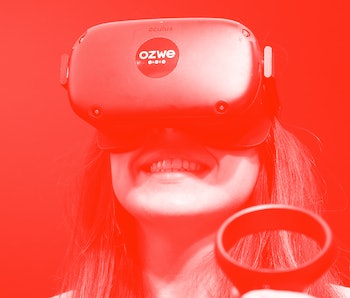 Following both Google’s and Amazon’s lackluster leads, The New York Times reports that Meta, the monolith formerly known as Facebook, is considering opening physical stores to sell the public on its augmented and virtual reality products. According to insider sources and internal documents, Meta may build showrooms to “introduce people to devices made by the company’s Reality Labs division,” including the Oculus Quest (soon-to-be Meta Quest), Facebook Portal (soon-to-also-be Meta Portal), and its creepy eyewear team-up with Ray-Ban (soon-to-be-forgotten).

Internal documents seen by the NYT reveal that Zuckerberg and other Meta execs hope the concept store could provide all us pesky, naysaying skeptics with a venue to be “welcomed” into a “judgment free journey” within the metaverse. Somewhat confusingly, suggested names for the store included “Facebook Hub, Facebook Commons, Facebook Innovations, Facebook Reality Store and From Facebook,” with the eye-rolling “Facebook Store” leading the pack. We assume this was before the “Meta” rebrand was introduced.

So yeah, be on the lookout for potential Meta Stores opening soon to pause in front of, look in through the windows at, then completely ignore and continue about your day.

A hard sell — No matter the venue, be it digital or physical, selling the public on a “metaverse” experience courtesy of Facebook is going to be an uphill battle for Zuckerberg. If there’s one thing that unites this country right now, it’s the growing loathing and distrust of all things Facebook, and no amount of rebranding can help at this point. Decisions like almost immediately walking back its ban on facial recognition tech and offering a product that can’t possibly live up to Meta’s promises will do little to sway anyone towards support.

If the Meta Store is ever actually built, it will in all likelihood make its products appear even more novelty-like than they already do... which is sort of the exact opposite effect we assume Zuck is hoping to have with a physical location.

...There’s also a good chance that this will never even get off the ground, which is totally fine, as far as we’re concerned.