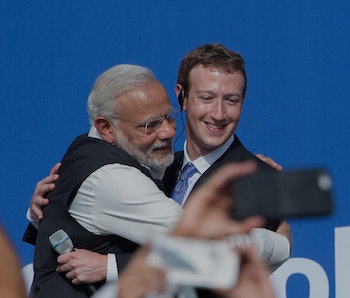 If you thought Facebook had a deleterious effect on American politics only, think again. A recent investigation published by The Wall Street Journal shows the company went easy on hate speech policies in India, despite its highly tense and violence-riddled situation. Employees at Facebook flagged higher-ups for what they called favoritism toward the ruling Hindu nationalist Bharatiya Janata Party. One of the examples included Indian politician T. Raja Singh's post in which he openly called for shooting Rohingya Muslims on sight and depicted Indian Muslims as traitors whose worship sites should be burned to the ground.

Disturbing as the content was, Singh's posts weren't deemed to violate Facebook's hate speech policies, The Wall Street Journal found. In the context of India where communal and religious violence has led to the deaths of minorities and the rise of lynch mobs, critics said that such a decision had real-world consequences.

Singh, who is a member of the Bharatiya Janata Party alongside the controversial prime minister, Narendra Modi, is still very active on Facebook. And things are getting thornier. Now Indian activist Saket Gokhale has accused a prominent figure inside Facebook — Ankhi Das, Facebook's public policy head for Central and South Asia — of having connections with the Hindu nationalist movement by way of her sister.

Fishy politics — In his investigation, Gokhale recently told Vice that the Election Commission of India initially emphasized advertiser transparency prior to the elections in 2019. It had even said that it would review its relationship with Facebook in the light of the Cambridge Analytica scandal, which rattled the United States. But less than a week after that announcement, the commission said its findings were "aberrations" and continued its partnership with Facebook. It raised suspicion among transparency advocates right away.

Das, in particular, was a figure who opposed applying hate speech rules to local Hindu nationalists. Her sister, Rashmi Das, was coincidentally the head of a student wing organized by the ruling party's parent movement called Rashtriya Swayamsevak Sangh, yet another Hindu nationalist group.

A megaphone for rifts — In comments to Vice, the ruling party denied having any connections with Facebook figures but critics say that students who condemn the nationalist government or even slightly question its policies and animus toward Muslims and other minorities are often and quickly silenced. This won't be the first time that it has come to light that Facebook played a role in amplifying communal hatred. You might remember hate speech on the platform during the religious riots in Sri Lanka in 2018 as well as hate speech against Rohingya Muslim immigrants in Myanmar.

Facebook CEO Mark Zuckerberg loves to trot out choice buzzwords like "democracy" and "free speech" but time and again, investigations like these show us that Facebook doesn't foster equality and peace, its a weapon for stirring hatred and violence that's open for exploitation by any government that chooses to use it for those ends.