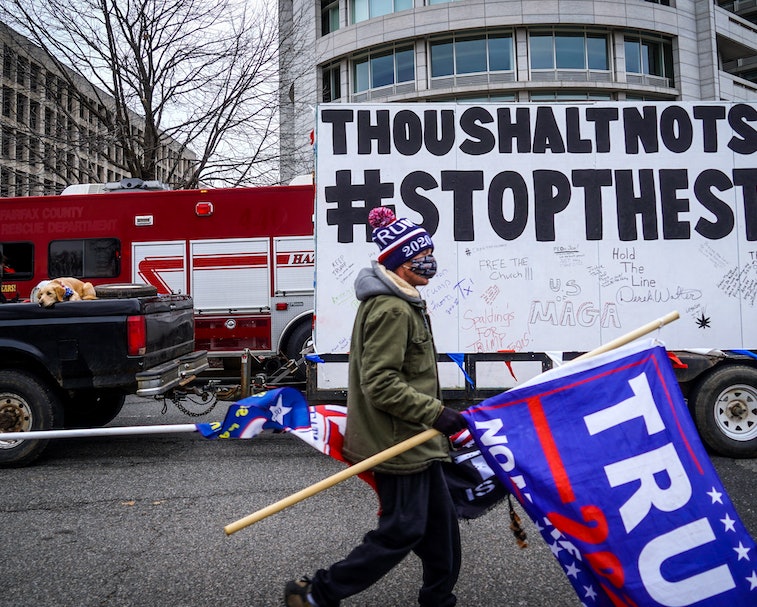 Much like members of Donald Trump’s cabinet resigning with two weeks left, Facebook’s indefinite suspension of the President is, in the wise words of JoJo, too little too late. BuzzFeed News uncovered dozens of “Stop the Steal” events and groups are still active on the platform, which Input confirmed were still up as of January 8. Despite claims to the contrary following BuzzFeed News' reporting, some groups were still available, but "stop the steal" currently appears to be effectively banned throughout Facebook.

This isn’t over — In Input’s extraordinarily complex search of “stop the steal” on January 8, a particular event stood out among the rest. Clearly originally meant for Wednesday’s violent riot, based on discussion posts and media, the event has moved its date to Inauguration Day. Considering the general lack of consequences for storming the Capitol with weapons and planting pipe bombs, the insurrectionists will likely only be emboldened in the coming weeks.

By allowing these groups and events to remain untouched, Facebook enables their ability to organize. Even with their cowardly leader finally admitting defeat, these right-wing, white nationalists may have been radicalized beyond the need for a figurehead — in part, if not largely by Facebook’s own hand.

A Facebook spokesperson told BuzzFeed News that the platform “removed the original Stop the Steal group in November and continue to remove additional Pages and groups that violate our policies.”

On January 11, in an interview with Reuters, Facebook COO Sheryl Sandberg said the company had removed anything related to "stop the steal," QAnon, and other white nationalist tags / rallying cries during the week of the insurrection. The same day, BuzzFeed News reporter Jane Lytvynenko found a massive "Stop the Steal" Group with roughly 14,600 members still operating. Within 24 hours, despite the group trying to change its name, it was removed. Input can no longer find Groups, Events, or Pages related to "Stop the Steal."

To all the warning signs I ignored before — Shall we count the ways Facebook has been complicit in violence committed in the name of white supremacy? For years, Facebook has ignored the polarization fueled by its recommendation algorithm as well as the role Groups and Events play in the incitement of violence, especially against people of color. In the past year alone, we’ve watched the platform ignore deadly warning signs, fumble its attempts to curb misinformation, and rely on journalist exposes to stamp out extremely popular groups.

“Disabling President Trump's account is like pulling out the top of a weed without pulling out the roots,” author of How to Lose the Information War, Nina Jankowicz, told BuzzFeed News. “Yes, the president incited his followers to violence this week, but they were primed for it by the content they had been fed over months or years in private and closed groups like Stop the Steal on social media.”

Facebook had an extraordinary headstart, and it can’t seem to put out the fire it set and then stoked. At this point, it’s unlikely that any amount of buttering up will keep the Biden administration off its back.