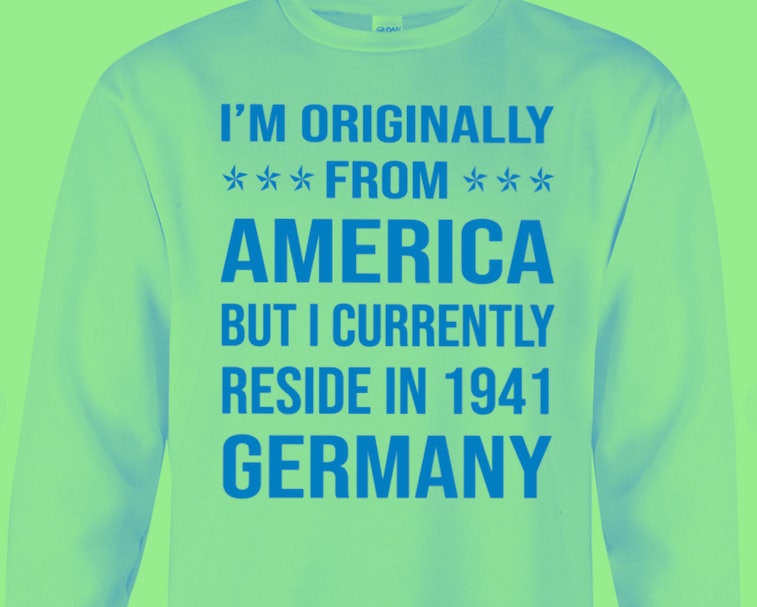 It took far, far (far) too long, but Zuckerberg finally caved to doing the absolute least amount of moderating possible to limit the spread of dangerous misinformation on Facebook. He also apparently feels a massive rebrand and push towards “Facebook, but in virtual reality” is the best way forward for all of us, but none of this really helps when it comes to the kinds of the kinds of horrific advertising that routinely goes unchecked throughout Zuckerberg’s social media platforms.

A dive into just some of the ads allowed to circulate across users’ Facebook and Instagram feeds reveals a plethora of inaccurate, inflammatory, and violent rhetoric from pro-Trump businesses looking to capitalize on MAGA fever through apparel like t-shirts and hats. One design features Holocaust-diminishing, objectively ridiculous sentiments like “I’m originally from America, but I currently reside in 1941 Germany.” Another simply says “Make Hanging Traitors Great Again.” Although Meta claims it is doing its best to monitor for problematic ads, it still has much looser restrictions on what can and can’t be said in those spaces versus dedicated political group pages or stores.

Profits over politics — Facebook and Meta’s advertising blind spots are even more obvious when considering just how much money they make from the various extreme rightwing businesses. CNN Business reports that one outlet, Ride the Red Wave, paid Facebook over $280,000 for advertising space since May alone. Another similar company has spent over $500,000 on ads since 2019.

Businesses apparently don’t need to pay those kinds of amounts to reach vast quantities of people, though. One shirt reading “Proudly Unpoisoned” only cost $2,500 to reach an estimated 400,000 feeds. With those kinds of numbers, it really doesn’t matter whether or not the products are explicitly political or misleading — they get users thinking, talking, and unfortunately, often believing what they say.