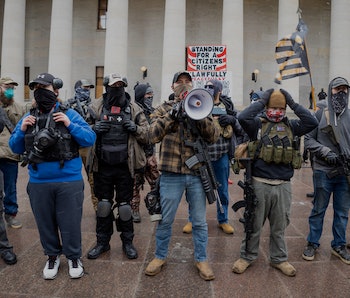 In the fallout of the January 6 insurrection at the U.S. Capitol, Facebook has been focused on damage control, much of which comes in the form of public promises. Facebook is good at a few things, but following through on its frequent promises to "do better" is not on that list.

Facebook decided in the months leading up to the 2020 election that it would stop recommending “political content or social issue groups” on users’ feeds. Mark Zuckerberg said as much when he testified in Congress in October. Doing so, according to Facebook’s research, points users toward extremist content. Facebook then re-upped this commitment in a January 11 statement, in which the company said it was “not recommending civic groups for people to join.”

As usual, Facebook’s words have quickly proven to be just that: words, with no concrete action attached to them. A new investigation from The Markup found that, despite Facebook’s promises, the network has indeed been recommending political groups to users — and that Trump supporters received the most recommendations by far.

Not a great look, Zuck — Through its Citizen Browser project, which tracks links and group recommendations to Facebook users across the United States, The Markup found 12 political groups in the top 100 groups recommended to its survey group. Those groups were recommended through December and January as well, in spite of Facebook’s renewed promises not to do so.

These groups are, as you might expect, cesspools of misinformation, conspiracies, and calls for violence. Some included direct discussions of logistics for the Capitol insurrection. Others, like one dedicated to Rudy Giuliani, included posts calling for Georgia’s governor and secretary of state to be hanged because they refused to overturn the election results.

“We have a clear policy against recommending civic or political groups on our platform, and are investigating why these were recommended in the first place,” company spokesperson Kevin McAlister stated.

At least one of the posts found by The Markup was removed after the company contacted Facebook.

It’s still unclear how, exactly, Facebook defines a “political” group; this confusion could account for some of the recommendations seen on the Citizen Browser panel. Even if Facebook did have a clear definition to work off of, though, it’s highly unlikely the company would manage to completely eradicate political groups from its recommendations algorithms. The platform is just way too enormous for effective moderation.

In the meantime, Facebook will continue making bold statements about its innocence, even when it’s easy to show they’re blatantly false.