Facebook finally banned Holocaust denial — but other genocides are fine

"Drawing the right lines between what is and isn't acceptable speech isn't straightforward, but with the current state of the world, I believe this is the right balance." 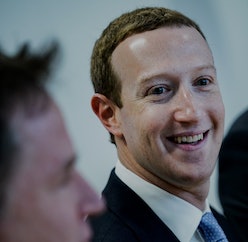 Facebook announced yesterday that denial of the Holocaust will no longer be allowed on any of its platforms. The move — which civil rights groups have long been pushing for — stands in direct contrast with CEO Mark Zuckerberg’s hard-fought beliefs about free speech and social media.

Zuckerberg posted an update to his public Facebook page Monday morning with the news. He notes that Facebook has been taking down posts that praise the Holocaust for a long while now, but that “rising anti-Semitism” pushed the company to expand the practice.

“I’ve struggled with the tension between standing for free expression and the harm caused by minimizing or denying the horror of the Holocaust,” Zuckerberg writes. “My own thinking has evolved as I've seen data showing an increase in anti-Semitic violence, as have our wider policies on hate speech.”

This is not a catch-all move, though — users will still be allowed to be vocal in their denial of other historical genocides. Apparently, Zuckerberg’s research only went so far. Denying the systematic and deliberate killing of a large group of people is totally fine by Facebook, as long as you don’t mention the Holocaust.

What took so long? — Zuckerberg’s post is short by his standards, which means it’s more important than ever to read between the lines. Here those lines paint a picture of a well-documented problem that has been left to fester for far too long.

Zuckerberg acknowledges in his post that many Holocaust denial posts have already been removed by Facebook because they constitute hate speech. The question, then, is why if Facebook knew this was an issue of hate speech it did nothing for so very long?

The founder and CEO says he’s “struggled” with taking down these posts because he sees doing so as a violation of “free speech.” What he fails to recognize — and this is nothing new, of course — is that letting users feel “free” to spew hate is sinking his ship.

Just scratching the surface — It is, of course, very good that Facebook has finally banned Holocaust denial across its platforms. Much like blackface and anti-Semitism, it’s a topic Facebook has taken a decidedly laissez-faire approach to for years, enabling the spread of hate-filled content and emboldening related groups.

Nonetheless, the new ban is not nearly enough. On the most basic level, there’s no logic in banning the denial of just one genocide. Facebook confirmed to Bloomberg that the new rule applies exclusively to the Holocaust. How can you call Holocaust denial hate speech but think the downplaying of, say, the Rwandan genocide is perfectly fine?

And then there is the rest of the hate speech that proliferates on social media. Facebook has become a veritable cesspool of vitriol. Everything from hateful ads against trans people to hate-filled ads by politicians is allowed to not just exist on Facebook but to thrive.

Confronted face-to-face with its platforms’ shortcomings, Facebook has made efforts to deny and skirt around these issues to save face. Any acquiescence to pressure has seen the company concede a millimeter in the shadow of miles and miles of missteps. Facebook looks set to continue to ask forgiveness rather than permission, and to only do the right thing when it's forced by outside forces to do so.