“[G]et the message out that while Meta is the current punching bag, TikTok is the real threat especially as a foreign owned app that is #1 in sharing data that young teens are using.” 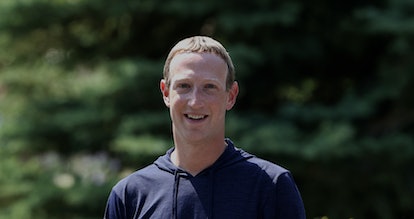 Meta knows its longstanding social media dominance is waning, and it’s not averse to playing dirty in defense of its title. As a new exclusive from The Washington Post published earlier today showcases, internal company emails from a GOP consulting firm hired by Facebook detail the lengths to which the Team Zuckerberg is willing to go to smear its biggest competitor, TikTok.

As recently as February, directors within the PR firm, Targeted Victory, tasked workers with “get[ting] the message out that while Meta is the current punching bag, TikTok is the real threat especially as a foreign owned app that is #1 in sharing data that young teens are using.” Of course, it didn’t matter that evidence offered to local and regional outlets regarding problematic viral trends — such as the “Devious Licks” challenge daring students to vandalize school property — often originated from Facebook first and not TikTok.

But hey, whatever gets the attention of politicians like Sen. Richard Blumenthal, who eventually wrote a letter demanding TikTok execs testify about the trend’s harmful effects.

Plenty of concerns abound — Of course, it’s not like Facebook needs to generate spurious scare tactics to malign TikTok, a platform that undoubtedly earns its own share of justified scrutiny. By and large, however, much of the moral panic stoked by Targeted Victory could be easily applied to Meta’s own apps like Facebook and Instagram. But Meta doesn’t particularly care whether or not fears are founded, or even where they actually originate — they’re just concerned with making sure consumers and politicians turn sour on TikTok instead Zuckerberg for a change.

What bias? — One immediate byproduct of the latest investigation into Facebook showcases the illegitimacy of conservative claims that the company is biased towards the left, or doing anything akin to “shadowbanning” conservative voices. Targeted Victory was started by an ex-Mitt Romney staffer, and is one of the biggest recipients of Republican money — including the pro-Trump PAC, America First Action. It’s sort of hard to argue about Meta’s leftist agenda when this kind of symbiotic relationship is exposed. Like Meta itself, however, Republicans aren’t necessarily concerned with the truth; they are simply concerned with staying in power.