Facebook COO thinks TikTok poses a threat to the company, and she's right

“In the world of tech we compete for every minute of your attention. Every day you pick up your phone, I mean my kids pick up the phone and they're on TikTok.” 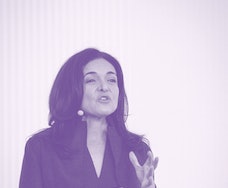 Facebook COO Sheryl Sandberg says TikTok poses a threat to Facebook and others in the social media industry because of its unprecedented growth. And she’s right to be concerned — based on download numbers alone, TikTok is far outperforming both Facebook-owned Instagram and the main Facebook app.

In November, TikTok hit 1.5 billion downloads. It doesn’t look like interest in the app will be declining any time soon, despite growing concerns by lawmakers and industry executives.

Bans in the U.S. are limited — The U.S. government is still investigating whether or not TikTok is a threat to national security. The app has already been banned by some U.S. government agencies; those in the U.S. Navy, for example, haven’t been allowed to use the app since December. The U.S. Army, Marine Corps, and Coast Guard quickly followed suit. Most recently, the TSA banned its employees from posting work-related content on the app.

None of these bans have significantly hurt TikTok’s download numbers — the majority of its users are teenagers, after all. Alarmists have yet to back up their claims of the app’s threat to national security. Unless ongoing investigations manage to reveal hard evidence against TikTok, the app’s fan base is sure to just keep growing.