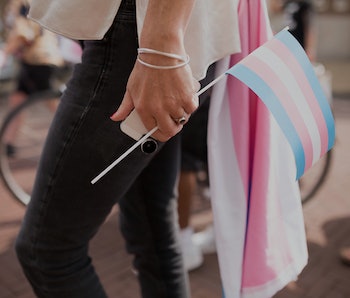 Facebook approved multiple political ads from the American Principles Project (APP), according to Media Matters. The anti-LGBTQ+ organization APP is running at least 16 ads that sow misinformation about medical care for trans youth and denigrate transgender athletes. Facebook has made approximately $25,000 off the campaign since it started at the beginning of September.

YouTube is also allegedly running these ads and has been as quiet as Facebook on the subject. Since Twitter has banned all political ads, the three videos used in the campaign live on the APP’s account page and are reportedly being fact-checked.

Principles? What principles? — The APP ad campaign began on September 3 as a way to push against Joe Biden, Michigan Senator Gary Peters, and The Equality Act which would prevent discrimination based on sexual orientation and gender identity. The videos feature a man who transitioned twice (he's currently the gender he was assigned at birth) and also a track meet asserting that trans girls unfairly compete like boys. The videos push for prohibiting medical transitioning for minors while invalidating and weaponizing the lives of trans youths.

“These ads perpetuate dangerous stereotypes, traffic in misinformation, and put the lives of transgender people at risk,” GLAAD President and CEO Sarah Kate Ellis said in a statement, according to NBC News. “Sites and social media platforms like YouTube and Facebook should decline to run them and send a message loud and clear that those who would use their platforms to peddle hate and lies will not be tolerated or validated.”

The Human Rights Campaign (HRC) also immediately decried the $4 million ad buy in battleground states. The organization also pushed Twitter to take down the videos, but none have been flagged as misinformation or taken down.

Facebook never learns — Despite a tumultuous summer in which multiple calls to action led to massive corporations pulling their Facebook ad campaigns, Facebook continues to dig itself deeper into a hellscape of its own creation. The platform has resorted to buying or bullying advertisers to keep their campaigns, and it will only end its promotion of political ads the week before the election.

Zuckerberg has already forgotten his own words from earlier this year when he codified that sexual orientation and gender identity would be a part of Facebook’s anti-hate speech ad policy. But who needs principles when you have cold, hard cash?