“It was clear this was not us complying with the law, but a hit on civic institutions and emergency services in Australia.” 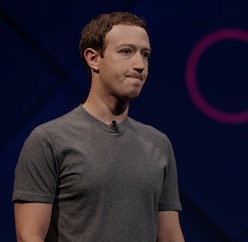 It’s hard to overstate just how ruthless Facebook has been in its (Meta) quest to dominate pretty much every facet of social and internet communication. This is, after all, the House of Zuckerberg that recently hired a Republican consulting firm to help smear their biggest rival, not to mention the very same company that bought up people’s digital prayers in order to then turn around and sell to advertisers. A new exposé from The Wall Street Journal published yesterday, however, lays out a paper trail pointing to perhaps one of their grossest and borderline villainous strategies yet: Holding the Facebook pages of Australian hospitals, charities, and emergency services hostage as leverage amid discussions with the country’s government regarding contentious reform proposals last year.

According to internal documents and emails provided to The WSJ, Facebook not only shoddily took down pages for the Children’s Cancer Institute, women’s shelters, and fire rescue services (during fire season, no less), they prevented certain COVID-19 info pages from reaching users during initial vaccine rollouts. Facebook slowly restored these pages a few days later, following tentative alterations to Australian legislation regarding compensating publishers for their original news content.

Deny, deny, deny — Facebook, of course, takes serious umbrage with being accused of these totally plausible, pretty well-founded tactics. “The documents in question clearly show that we intended to exempt Australian government Pages from restrictions in an effort to minimize the impact of this misguided and harmful legislation,” a Facebook spokesman told The WSJ, later adding, “...Any suggestion to the contrary is categorically and obviously false.”

Multiple unnamed Facebook employees beg to differ on the issue. Given systems and safeguards already in place, they argue that company execs specifically pressed the group responsible for taking down Australian Pages to deliberately design an overreaching, “crude algorithmic news classifier that ensured more than just news would be caught in the net.” When informed that many sites were inadvertently getting swept up in the blacklisting, “Facebook didn’t halt or reverse the process. It ramped up the takedown, expanding the use of the algorithm from 50% to 100% of all Australian users over the next several hours.”

Over the moon — Instead of being concerned by the “accidental” overzealous algorithm, Facebook execs like Zuckerberg and Sandberg were thrilled at just how successful it was at grinding Australian information sharing to a virtual halt. Sandberg, for example, called the project “a new standard” for the company, while Zuck emailed everyone to thank them for helping to achieve the “best possible outcome in Australia.”

Regardless of everyone’s intentions ahead of Australian legislation, the brief blackout showcases the inordinate power Big Tech companies like Facebook have over the flow of information and news. The fact that these many vital Pages were taken down simultaneously shows how serious lawmakers should be taking the consolidated power at places like Meta, Twitter, and Amazon.