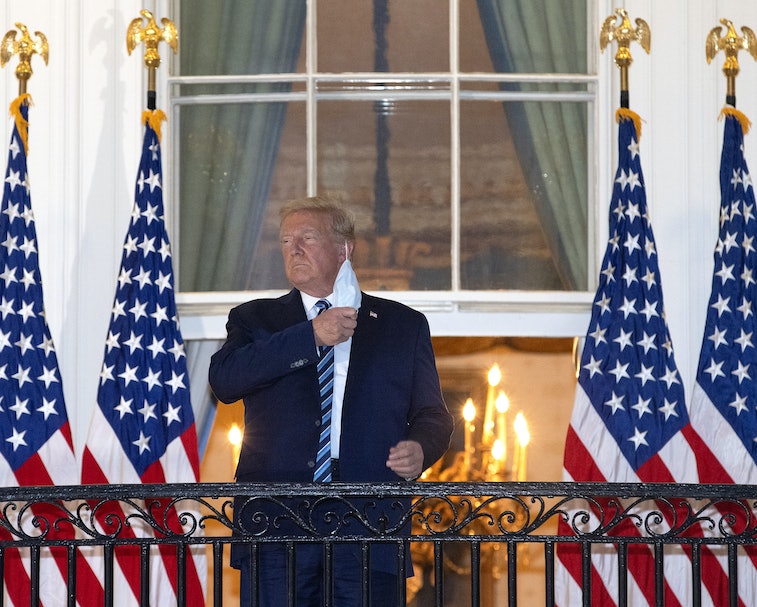 Facebook and Twitter took varying levels of action against a post shared by President Trump this morning, in which he claimed the flu is less lethal than COVID-19.

“Flu season is coming up! Many people every year, sometimes over 100,000, and despite the Vaccine, die from the Flu,” Trump wrote. “Are we going to close down our Country? No, we have learned to live with it, just like we are learning to live with Covid, in most populations far less lethal!!!”

More than 200,000 people have died in the U.S. this year from COVID-19 — more than the flu has killed in the last five years combined. But Trump's never been one to let the facts stand in the way of propaganda.

Facebook removed the post entirely from Trump’s feed, in accordance with its COVID-19 misinformation policies. Twitter, soon after slapped a misinformation warning label on the tweeted version of the message, stating the tweet “violated the Twitter rules about spreading misleading and potentially harmful information related to COVID-19.”

Both social media giants have really stepped up their moderation game in recent months, especially when it comes to cracking down on misinformation around the pandemic. There’s still a very long way to go, though.

Facebook did it right again — In general, Facebook has become notoriously lax with its moderation policies. The company has repeatedly allowed misinformation to spread through its networks — not to mention the outright lies it allows politicians to post via paid advertisements.

This is now the second time Facebook has removed one of Trump’s posts on the site. In August the company removed a video of Trump claiming that children are “almost immune” to COVID-19. That, too, is false. That, too, is dangerous information to disseminate.

Trump has already responded, sort of — In typical Trump fashion, the President has responded with abstract anger on social media.

Trump is referring to Section 230 of the Communications Decency Act (CDA 230), which has long protected social media companies from information shared by their users. Conservative politicians have been fighting to drastically alter the law in order to create a more “fair” moderation system. Which is political speak for letting them muzzle what they see as dissent when they want to.

Maybe there’s no solution — At this point, the problem of moderation on Twitter and Facebook is beginning to feel hopeless. It’s all well and good to create policies around dangers like misinformation — but locating and responding to every post feels like a Herculean and Sisyphusian task.

Some other companies have taken harsher stances against users like Trump who, despite being a very public figure, mostly adds only hate and vitriol to social media. Twitch banned the President from its platform entirely, for example, and Snapchat removed him from its promotional Discover page.

It’s easier than ever to spread lies and half-truths on the internet. Social media companies bear the brunt of the burden of truth (even though, Facebook, in particular, likes to pretend it doesn't) — but how can we expect them to weed through billions of posts to find the fake ones? And, even when they do so, the line between truth and fiction is not immovable. Of course, if we could make it so that not moderating content meant financial repercussions, we suspect they'd work out how to do very quickly indeed.