EV startup Faraday Future is going public with a bang 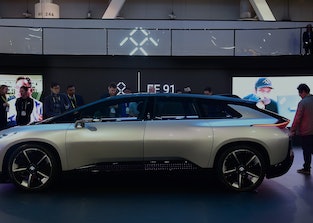 Tesla competitor Faraday Future is gearing up to go public, the company announced today, following weeks of speculation about that very move. The company is set to raise about $1 billion in its initial public offering.

Faraday Future won’t be going through this process on its own; it will first merge with Property Solutions, a special-purpose acquisition corporation (SPAC), in a deal that was first reported by Bloomberg earlier this month. At that point, the Property Solutions deal was expected to be valued closer to $3 billion.

The electric vehicle company has had a difficult time finding its feet in the automotive market. By 2016, just two years after the company’s inception, ex-employees and government officials were already expressing doubts about Faraday Future’s financial situation — the company had trouble meeting any of its production or sales goals. The company’s only really been able to survive thanks to numerous funding injections from various foreign and domestic investors.

Faraday’s future is as shaky as ever. Could a successful IPO give it the steam necessary to survive in a Tesla-dominated market?

Special-purpose what now? — Faraday Future’s shot at going public is going to be anything but traditional. The company is working with something called a special-purpose acquisition corporation (SPAC) to complete the transition. And no, you’re not alone if you have no idea what that means.

A SPAC is essentially a company that exists just to invest in other companies. They’ve been around since the early 2000s, but they’ve been used more than ever for IPOs in the last couple of years — dealing with an SPAC removes much of the uncertainty around an IPO and can smooth out the entire process, plus it can make listing easier because it shields companies from some of the usual hurdles more conventional IPOs face. Faraday Future has reportedly been talking to various SPACs about acquiring the company since last June.

As part of Faraday Future’s SPAC deal, Property Solutions will provide about $230 million for the IPO, with the remaining $775 billion being brought in by a new funding round.

The Verge has a great explainer if you want to learn more about how SPACs are drastically changing IPOs.

Can it take on Tesla? — The electric vehicle market is larger than ever before — but that doesn’t mean it’s any friendlier to startups. The market’s expansion can be attributed mostly to Tesla’s jaw-dropping expansion in 2020, which has sent the company’s stock soaring more than 600 percent since January of last year. While legacy carmakers are all trying to ramp up their EV plans, Tesla is sucking up almost all of the oxygen in the room.

It’s into this near-oxygen-less environment that Faraday Future launches its last-ditch attempt at profitability. The company plans to complete its manufacturing facility in Hanford, California, with some of its new cash-on-hand, which will total about $748 million when all is said and done.

Faraday Future has indeed developed impressive electric-vehicle technology — but it also has an exhausting history of messing up its finances, failing to meet expectations, and hemorrhaging employees. Whether it can turn that history around remains to be seen. Clearly, some investors are willing to bet it can, though.