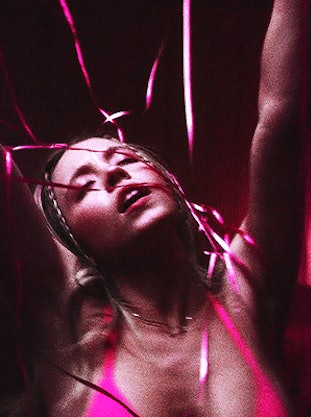 How much engagements around the "Euphoria" tag spiked after the Season 2 premiere.

Sometime in the last two months, I fell into a weekly ritual that feels more than a little anachronistic in the year 2022.

It went a little something like this: Sunday night comes — ahem, Euphoria night — and I submit to the all-encompassing infatuation that effective art tends to ignite. At 9 p.m. ET, my head clears of any thoughts not relating to the lives playing out in the fictional East Highland and I am fully, 100 percent in there. When it’s over, there’s the obligatory scream/gush/blink-in-tearful-silence sesh with my friends who come over to watch every new episode. Then, when they leave, I turn to the internet.

To Tumblr, of all places, a platform I previously hadn’t given more than a passing thought to since college. And clearly, I’m not alone.

With the onset of Season 2, Tumblr logged an astounding 2939.53 percent increase in engagements with the “Euphoria” tag compared to the previous month, the company told me. Similar spikes were noted around tags like “Rue Bennett” and “Jules Vaughn,” the characters played by Zendaya and Hunter Schafer, respectively. People on Tumblr are talking about Euphoria. A lot.

“This year, we have just seen absolutely crazy growth numbers” around Euphoria-related content, Cates Holderness, Tumblr’s Trend Expert, told Input. “It’s been really, really interesting to see,” Holderness said. “When Euphoria first came out in 2019, it resonated immediately with Tumblr users. They loved the cinematography, they loved the storyline.”

“It can be a very difficult show to watch,” Holderness noted, adding, “I think the show really resonates with teens and young adults who see themselves represented in various different ways,” be it through the show’s queer and trans representation or those “feelings of high school being ramped up to 11.” According to Holderness, “almost half of Tumblr [48 percent] is Gen Z” and the LGBTQ community is “one of the largest communities on the platform.”

Now, let’s dial it back for a moment. It’s hard to find a corner of the internet not alive with Euphoria content since the show’s explosive Season 2 premiere. In that sense, Tumblr is not at all unique. Variety reports that each episode pulls in an average of 16.3 million viewers, making it HBO’s second most-watched show in almost 20 years. Only Game of Thrones has it beat.

But for all the hype around Euphoria, there are, inevitably, a lot of bad takes out there, many of which are just thinly veiled, harmful judgments on issues that affect real people. It’s exhausting. Uncompassionate musings on addiction from those who have never been or loved an addict (I have); moralistic finger-wagging and disbelief that high schoolers might really party and love and suffer like this (sorry Mom, I did!); insensitive conversations on abuse and manipulation (don’t even get me started).

On platforms like Twitter, that negativity has a tendency to find you even if you’re not looking for it. I’m just here for bisexual lighting and Fexi content, okay?

Instagram, on the other hand, is simply flooded with the same three or four memes ad infinitum and Euphoria-inspired makeup tutorials copied over from TikTok. There is the @euphoriaaddicted account, with its (honestly, ingenious) scene reenactments by way of Barbies, but that’s about it for compelling original content.

And actually, it’s kind of how I got here.

It was Season 2, Episode 1 (“Trying to Get to Heaven Before They Close the Door”), Sydney Sweeney’s Cassie hiding in the bathtub.

The now-iconic scene spurred the creation of memes in what has to be record-breaking speed, completely washing out my Explore page before the episode’s end. (To be fair, they were all hilarious.) But in that sea of identical images — black text on a white background above the birds-eye still, screenshotted from Twitter — something stood out: a gritty reconstruction of the scene, using a Barbie doll as a stand-in for Cassie. It was refreshingly original; it felt, well, like something you’d see on Tumblr.

“It's a lot more curated and more intimate than other social media.”

We may be nearly a decade on from the period that could be considered Tumblr’s peak, but the platform is, as the hundreds of millions of users that visited the site last year alone can attest, still very much alive.

On Tumblr, fandom, in particular, thrives in a way much unlike in other corners of the internet, as does the sense of community around those fandoms. Its opt-in system of following specific blogs and topics rewards original content and worthwhile discussion rather than hate-clicks, and keeps your dashboard relevant to your interests at all times.

“What you see is really catered by who you follow,” 18-year-old Aashna, one of several members contributing to the popular dailyeuphoria Tumblr blog, said. “It’s really, really easy to curate what you want to see.” If there’s a certain type of content you don’t like to see, simply don’t follow it (or unfollow if it slipped through the cracks), “and then you most likely never have to see that type of content again.” On Twitter, Instagram, and TikTok, it’s different — you have to go out of your way to mute that unwanted content and stay on top of blocking people, Aashna said.

“It's a lot more curated and more intimate than other social media,” Aashna said of Tumblr.

Marvel and DC have attracted major communities on Tumblr, Holderness points out, and traffic spikes with every new episode of The Book of Boba Fett and The Mandalorian. Hell, even Riverdale has a sizable Tumblr following. But the pull of Euphoria is an entirely different beast. Aashna, who is involved with source blogs for other shows besides Euphoria, too, said those are “not getting as much attention, people aren't really reblogging, they're just liking.”

“But with Euphoria, posts are easily hitting like 1,000, 2,000-plus notes,” Aashna said. “I made something last week that, right now, it’s at like 13,000 notes.” By comparison, a non-Euphoria post that could be considered successful sits at around 400 notes.

It makes sense that Euphoria would find its home here. After all, the Euphoria aesthetic is Tumblr (something the show more or less embraces with Kat’s “Tumblr queen turned findom” arc). “Aesthetics are huge on Tumblr,” Holderness agrees when I point this out, “and Euphoria has a very distinct, very iconic aesthetic. You get the sparkles, you get tons of bisexual lighting, which just naturally lends itself to GIF-set forms.”

“GIF sets are one of the most popular types of posts on Tumblr,” Holderness said. “So every time there's a new episode, we see just an outpouring of just beautifully rendered, high-quality GIFs.”

“It takes me an hour to watch the show, and then an hour or two where I'm just making stuff on Photoshop.”

Aashna reiterates this. “I think that [Euphoria] lends itself really nicely to Tumblr” due to its nature as a “creation-heavy site.” “The colors are really pretty and stuff like that,” Aashna explained, “compared to other shows where it’s just dark all the time or where it’s just the same filter over the show the whole time.”

Creators show up with near-religious dedication week after week to keep up the flow of fresh content. Some convene in Discord servers to discuss the new episode as they’re happening, then turn immediately to Photoshop and the like when it’s over to churn out the GIFs.

“On Euphoria nights, on Sunday, I usually would have a two- or three-hour window blocked out,” Aashna said. “It takes me like an hour to watch the show and then an hour or two where I'm just like making stuff on Photoshop.” Then, it’s into the mouths of the 60K-and-counting fans who follow the Euphoria tag on Tumblr, not to mention its many offshoots.

At the same time Tumblr was flailing downward, TikTok was seeing a meteoric rise, introducing indomitable new competition at the most inopportune time. The writing was, in many respects, on the wall.

And yet, Tumblr is starting to look a lot more appealing again in 2022, especially as the rest of the internet grows increasingly toxic. It’s almost a reprieve.

So, Sunday night has come and gone again — the first since Euphoria’s S2 finale — and my ritual scroll of the dashboard before bed lives on. I’m still poring through posts relating to that show, yes, but there’s Tamagotchi content to get lost in too... and Elden Ring... and Buffy the Vampire Slayer... and Y2K internet gems, and... Well, you get the picture.