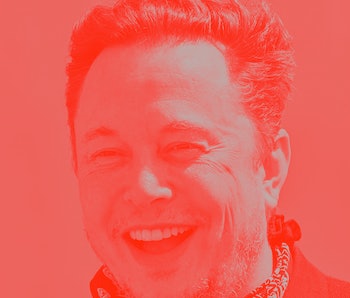 Last week on CNN, the director of the United Nations’ World Food Programme, David Beasley, told everyone that the organization needed approximately $6 billion to stave off the ongoing global famine that threatens the lives of over 42 million people. While that amount may seem unattainable to average individuals like you or us, it represents roughly just 2-percent of Billionaire Boyz Club member Elon Musk’s net worth. Knowing this, Beasley offered a comparatively meager request — a “one-time now” $6 billion gift of Musk’s constantly accruing wealth in exchange for the lives of millions.

Is that a lot to ask of most people? Sure. But Elon Musk is not “most people.” In fact, he is the wealthiest human in the entire world, so what is pocket change to him is an entire life’s salaries, retirement funds, and assets to others. His response? Tweet the absolute most dick-ish thing possible.

Dangling the cash above their heads — “If WFP can describe on this Twitter thread exactly how $6B will solve world hunger, I will sell Tesla stock right now and do it,” Musk tweeted in reply to someone else’s aspersions to Beasley’s request, adding the stipulation that “it must be open source accounting, so the public sees precisely how the money is spent.”

Ignoring for a moment the fact that, yes, of course the U.N. would provide accounting for those funds, especially when coming from the world’s richest man, this whole thing is such an obvious and gross way to discount the work of countless people combatting global famine. Do NGOs sometimes misappropriate and misuse funds? Yeah, sure. So do goddamn multibillionaires.

Polite response met with even more BS — In response, WFP director David Beasley showed the very essence of digital restraint by responding to Musk’s holier-than-thou tweets, clarifying that of course $6 billion won’t survive the eternal human problem of inequality, but it can directly help save the aforementioned 42 million lives at stake, 3.2 million of whom are children. “Let’s talk: It isn’t as complicated as Falcon Heavy, but too much at stake to not at least have a conversation. I can be on the next flight to you. Throw me out if you don’t like what you hear!” Beasley added.

Did Musk take him up on his plea? Of course he damn didn’t. He’s Elon Musk, the world’s wealthiest dillweed. “Please publish your current & proposed spending in detail so people can see exactly where money goes. Sunlight is a wonderful thing,” Musk responded.