“I’d like hereby to invite UAW to hold a union vote at their convenience. Tesla will do nothing to stop them.” 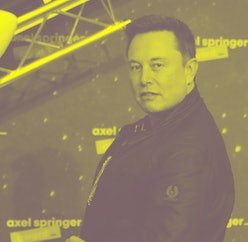 Elon Musk has made it clear time and time again that he is not a fan of unions, often citing their supposed uselessness in Tesla factories’ wondrous, egalitarian, totally fine work environments. In fact, he’s so confident of his workers’ fealty to their Technoking that he issued a challenge to the United Auto Workers (UAW) last night while tweeting with Gene Simmons: “I’d like hereby to invite UAW to hold a union vote at their convenience. Tesla will do nothing to stop them,” he proclaimed around midnight.

This would be a marked change in strategy for Musk, who once sent out an ominous, anti-union tweet that the National Labor Relations Board eventually demanded he delete on the grounds that it might come across as a threat. A spokesperson for the UAW refused to comment on Musk’s latest Kiss-instigated labor challenge, but instead referred us to Tesla and its Technoking’s current appeal of an NLRB order to allow organizing at the Fremont plant.

Musk knows the score — Like much of Tesla itself, Musk’s late-night tweet obfuscates the reality of the situation. To say that the company would not interfere in a UAW vote is all well and good, but sort of pointless when Tesla is actively working to prevent its workers for taking part in some of the most basic (and legal) unionization efforts, such as handing out parking lot leaflets in their off hours and wearing pro-union buttons.

Other legal issues to dodge — Musk isn’t just battling unions and the NLRB, he’s picking fights with the Securities and Exchange Committee (SEC), too. Both Elon and his brother (not to mention Input’s biggest fan) Kimbal are currently being investigated for various shady financial dealings, including insider trading. Those kinds of allegations can’t exactly be dismissed with an empty Twitter threat, so it remains to be seen if Musk will ever start taking these problems seriously, or continue cultivating his online edgelord personality. We’d be willing to bet a few Dogecoins on which path he’s most likely to take.