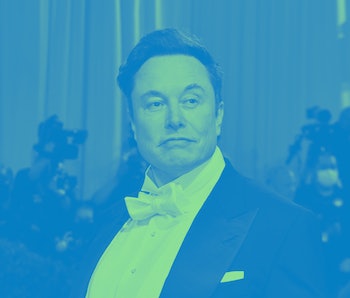 Myriad criticisms aside, Elon Musk’s strategy for Tesla is a sound one: Increase public interest and demand for electric vehicles by showboating his literally “S3XY” EVs, thus putting pressure on establishment carmakers to follow suit. Of course, after years of overpromises, shoddy deliverables, and unreliable profit margins, this approach has had mixed results, to say the least. But that’s alright for everyone else, all things considered, given that Tesla still owns a barely 2 percent market share of the total U.S. automotive industry.

Twitter, meanwhile, occupies almost 10 percent of the U.S. social media market — over 200 million people log on every day. Coupled with the platform’s corrosive, dangerously outsized influence on politics and socio-cultural public health, it makes for an entirely different, unwieldy beast. Unfortunately, Musk is already making it clear that he thinks his carnival barker approach to business and company policy will work just fine for his newest pet project. He couldn’t be more wrong, and I couldn’t be more terrified.

Don’t Met on It — Take this past weekend’s Met Gala, AKA the Hunger Games Capitol cosplay convention, for example. When asked by reporters about his thoughts on a looming mass exodus of Twitter employees opposed to working under their new Technoking, a Grimes-less Musk fired off that it’s a “free country” and that workers are free to leave if they feel so inclined.

While that’s of course true in theory, the reality of the situation could once again temper Musk’s economic idealism. Obviously, just because employees want to leave Twitter doesn’t mean they will have the means or opportunities to do so anytime soon, thus potentially leaving a lot of frustrated people on the payroll. And even if said exodus were to occur, the money Musk likely hoped to save on salaries and benefits wouldn’t make up for a diminished, overstrained workforce responsible for overseeing the kind of “public discourse” chaos their new boss wants.

Tweeting before he thinks — Meanwhile, on Musk’s recently acquired social media hellhole, the CEO tweeted (and subsequently deleted) additional ideas for revenue generation and cost-cutting strategies such like charging business and government accounts, banning advertisements, and reducing subscription prices for Twitter Blue. Oh, and making sure Dogecoin is an accepted form of payment on the app, because of course.

It’s truly hard to see how pretty much any of these proposals would move the needle in the way Musk has promised, but that hasn’t mattered in the past for companies like Tesla, where he can make vast, empty commitments to the disappointment of virtually no one in his little Cyber Rodeo cult. Twitter is home to quite a few more critics, not to mention a wholly different set of federal regulations.

Combine that with Musk’s hope to transform Twitter from a “niche” user base to something utilized by the majority of Americans, and it’s a recipe for disaster that puts his past failings to shame.

Pride before the downvote — Elon Musk has long relied on marketing and overpromising products and services, and it’s gotten him this far, at least. But pulling a 21st-century P.T. Barnum for sci-fi cars and space tourism won’t translate to a digital landscape as fragile as Twitter.

Like Trump, who relies on bombast and “bold” ideas, Musk may find himself humbled by the very thing that helped advance his career this far. Unfortunately for the rest of us, however, there may be a whole lot of pain in store between now and when it finally catches up to him.