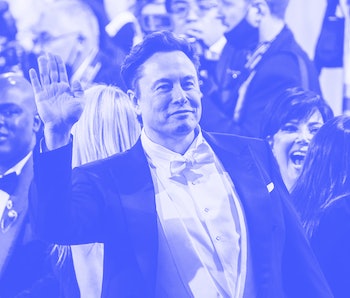 Elon Musk has big plans for Twitter once his takeover bid goes through, even if he hasn’t been the most forthcoming in sharing them with the public.

Most of Musk’s plans that we’ve heard thus far come across more as meme fodder than actual business ideas. Musk has apparently put together a full pitch deck, though, so potential investors can better understand where, exactly, he plans to lead the Twitterverse, according to The New York Times. Some of those plans are quite concrete — like quadrupling revenue to $26.4 billion in the next six years — while others have been left much vaguer.

One of the strangest parts of Musk’s pitch deck is a product referred to only as “X.” Musk included no details at all about what, exactly, X entails. He does say he expects the service to have 104 million users by 2028, with nine million users subscribing to it during 2023, the first year it will be available.

The most likely answer here is that “X” will just be some successor to Twitter Blue, Twitter’s current premium subscription-based service. This is Elon Musk we’re talking about, though, so it really could be anything.

Layoffs, then hires — While much of Musk’s pitch deck focuses on Twitter’s bottom line, there is one point about Twitter’s internal logistics — and it’s a doozy. Musk’s pitch hints at significant fluctuations in employee headcount over the next few years, with many existing employees being replaced in Musk’s takeover plans.

Musk hopes to increase Twitter’s overall employee count by about 3,600 by 2025, bringing its total to around 11,000. The years between now and then might be tumultuous for existing employees. The pitch deck shows Twitter’s headcount expanding to 9,225 employees in 2022 before dropping back to 8,332 in 2023 — a tactic that suggests a whole lot of reorganization.

More users, fewer ads — Musk spends a fair amount of time throwing out super high expectations for revenue and user growth in the pitch deck. By 2028, Musk thinks Twitter will have 931 million users — a huge leap from the 217 million users Twitter reported at the end of 2021. How exactly he expects to recruit all these new users is unclear.

Of course, all of Musk’s plans are still a big maybe. Twitter’s board has agreed to Musk’s takeover bid, but he doesn’t actually own the company yet. Whatever “X” is will just have to wait.