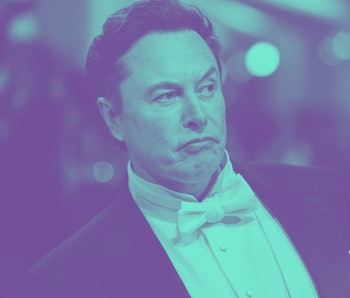 Elon Musk is slowing his steamroll of Twitter, citing two-week-old news that bots and spam accounts comprise roughly five percent of the social media platform’s total users. “Twitter deal temporarily on hold,” Musk announced earlier this morning alongside a link to a Reuters report from May 2. The CEO of Tesla and SpaceX quickly followed up with assurances that he is “still committed to acquisition,” although he didn’t provide any additional details on how or when that might happen.

Musk’s latest reverse-reverse-reverse(-reverse?) course clearly has to do with his worries over a totally reasonable and expected number of spam accounts, and not, say, the multiple federal investigations and class-action lawsuits currently brewing in response to his shady takeover tactics. It would appear that attempting to conduct a hostile takeover of a fatally flawed social media platform with the same blustering edgelord tactics you use on trolling your baby mama’s new partner is a terrible approach to business. Would would have thought?

Losing followers — Musk’s newest twist in the ongoing social media saga comes less than a day after Twitter CEO (for now) Parag Agrawal fired longtime consumer product leader Kayvon Beykpour and general manager Bruce Falck, both of whom exerted undeniably large influences on the company’s innovation and development. In a Twitter thread, Beykpour recounted that even though Agrawal “wants to take the team in a different direction,” the former employee still believes that “Twitter is one of the most important, unique and impactful products in the world. With the right nurturing and stewardship, that impact will only grow.”

As Musk apparently would have it, that nurturing and stewardship could take the form of allowing, sigh, Donald Trump back onto the app. Then again, who the hell knows what will happen at this point? For all we know, Musk could back out entirely of the deal by the end of the weekend. Fingers crossed.