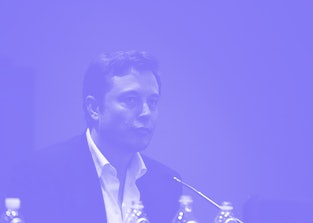 The amount Tesla's Technoking reportedly paid for a spot on one of Sir Richard Branson's future space jaunts.

The Billionaire Boyz Space Race™ entered a new phase over the weekend following Sir Richard Branson’s historic, hour-long flight to the edge of space aboard Virgin Galactic’s VSS Unity. By floating around a cockpit for approximately 5 minutes at roughly 55-miles above the Earth’s surface, Virgin’s CEO narrowly beat out his unofficial rival, Jeff Bezos, and the Technoking of Tesla, Elon Musk, for the title of “First Wealth-Monger to Technically Go to Space and Spit in God’s Eye.”

In a rare display of humility (we’re stretching the term “humility” to its linguistic limits here), Musk congratulated Sir Richard via Twitter shortly after VSS Unity’s landing. “Congratulations, beautiful flight!” Musk wrote, presumably while wiping away tears at the knowledge that he wasn’t the first Billionaire Boy to defile the majesty of the cosmos by tweeting out “#DogeCoinToTheMoon” or something similar while doing a weightless backflip.

According to Sir Richard himself, Musk also officially became one of the first 600 or so people to put down a deposit on a future Virgin Galactic jaunt, dropping $10,000 of the estimated $250,000 total price tag for a seat. Other famous wealthy people including Justin Bieber, Lady Gaga, and Tom Hanks have apparently also reserved spots aboard future Virgin Galactic launches. So congratulations to Tom Hanks — and Tom Hanks only — for the upcoming, transformative experience with the cosmos.

Bezos is not far behind — Sir Richard’s weekend lark to space comes only a few days before former Amazon CEO and crime against humanity, Jeff Bezos, is scheduled to do the same aboard one of his own Blue Origin rockets. Despite numerous petitions urging Bezos to remain there, unfortunately it seems like he will follow a similarly brief, obscenely wealth-flaunting trajectory to the edge of Earth’s atmosphere before coming back down to the surface. What a time to be alive when billionaires can turn “the sky is the limit” into an offensive reality.

Meanwhile, the Billionaire Boyz continue trashing our only home — The concept of private space joyrides for the super-rich would be bad enough in and of itself, but these vanity projects are an entirely different kind of awful when one takes into consideration the horrific consequences these men’s companies are wrecking on the one inhabitable planet we actually have.

Cases in point: a recent U.K. exposé detailed the astounding waste generated by Amazon warehouses every week, while Musk seems continually hellbent to wreck havoc on already volatile, environmentally dubious cryptocurrency markets. Until governments start truly holding the Billionaire Boyz accountable, however, it doesn’t seem like these kinds of stunts — both on Earth and above it — will end anytime soon. Some restrictions are finally on the horizon, so we’ll just have to see how far their money and influence can absolve them of responsibility.