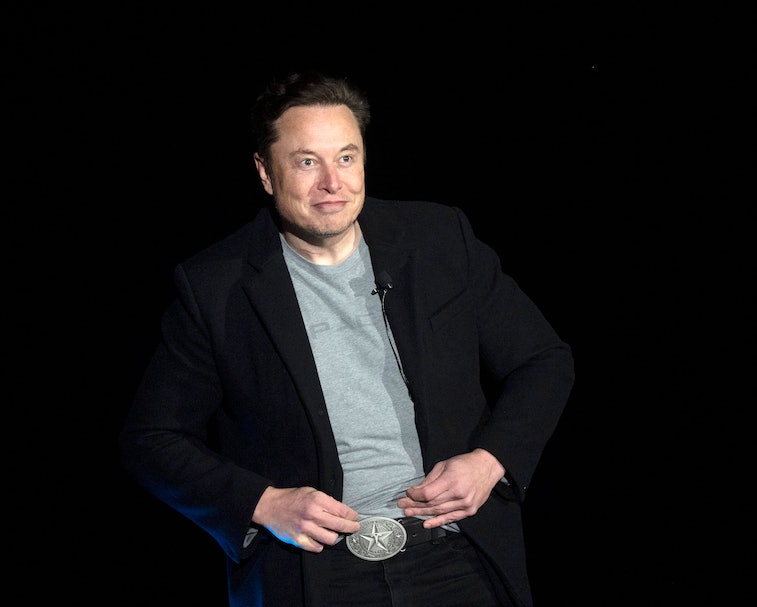 UPDATE: Less than an hour after publishing this story, Elon Musk apparently deleted the Hitler joke tweet in question. We’re not saying we had any effect on this decision, given its widespread coverage, but... we’re not not saying it, either.

At 2:46 am EST this morning, Elon Musk tweeted a joke about Hitler. Responding to a cryptocurrency website’s tweet about Canada’s Freedom Convoy of anti-vaccine mandate insurrectionists, Tesla’s Technoking uploaded a photograph of Nazi Germany’s genocidal führer emblazoned with “Stop comparing Justin Trudeau to me. I had a budget,” in the standard bold, white meme font.

A few hours later, post-sunrise, news outlets began reporting that Musk is also accusing the Securities and Exchange Commission of “harassment” in a “calculated” effort “to chill his exercise of First Amendment,” according to new court filings. A few days ago, Musk criticized the “fun police” at the National Highway and Traffic Safety Administration for taking away his cars’ beloved fart horn.

Meanwhile, another one of his companies might be torturing monkeys. This concludes your semi-regular Elon Musk update.

As self-aware as a Tesla in Full Self-Drive — Musk’s patently absurd “free-speech” complaint stems from a 2018 civil securities charge agreement with the SEC in which the department would monitor his communications with shareholders. “The SEC seems to be targeting Mr. Musk and Tesla for unrelenting investigation largely because Mr. Musk remains an outspoken critic of the government,” a lawyer for Musk and Tesla wrote in the filing.

Of course, even a casual monitoring of the situation over the years would indicate the government doesn’t really care one way or the other about Musk’s feelings towards them. What they’re far more concerned with are his near-constant, chaotic economic and business meddling veiled as internet trolling and memes.

Take, for instance... — This all stems from one example in particular. In September 2018, Musk tweeted that he was considering taking Tesla private through a buyout at $420 a share. The announcement caused a wild valuation flux, all of which amounted to nothing seeing as how Musk never mentioned it again.

The troll move ended up costing Musk and Tesla $20 million, along with the Technoking abdicating his throne as chairman for three years. Of course, $20 million is a drop in the bucket for the guy — hell, $5 billion is a drop in the bucket. It’s clear absolutely nothing is stifling Elon Musk’s speech or success. He is truly above the law financially, and that buys more rights than anything else in this country.