Actually, Elon Musk won't be joining Twitter's Board of Directors

“Elon’s appointment to the board was to become officially effective 4/9, but Elon shared that same morning that he will no longer be joining the board. I believe this is for the best.” 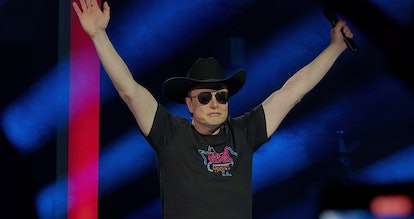 “Elon Musk has decided not to join our board. Here’s what I can share about what happened,” Agrawal’s missive opened, not at all ominously. Agrawal went on to explain that the Technoking would have been welcomed to the company “contingent on a background check and formal acceptance... but Elon shared [Saturday] morning that he no longer will be joining the board. I believe this is for the best.”

No word yet on whether Musk formally shared his declination, or if simply posting “Is Twitter dying?” earlier that Saturday did the trick.

Elon Musk’s Twitter timeline — So how did we get here? The short answer: Money. Elon’s money, to be more specific. The slightly longer answer? Elon’s money-insulated echo chamber.

Last month, Musk quietly bought up nearly 10 percent of Twitter while running what amounted to a company-disparaging PR campaign via his own Twitter account. During that time, he stoked rumors of creating a totally new social media platform more dedicated to Musk’s sophomoric definition of “free speech,” knowing full and well his pending offer to ascend to Twitter’s own board of directors. Nevermind that the Technoking legally probably should have disclosed his Twitter shares purchase well before word actually got out about it — with his wealth, that sort of “prerequisite” doesn’t exactly matter anymore.

Still, it’s clear Musk was openly scheming about some kind of newly bought influence upon Twitter’s policy towards what users can and can’t get away with saying. And here’s where the echo chamber enters into things.

Four-dimensional checkers — Judging from Twitter CEO Agarwal’s intentionally hostile public tone in his own announcement, Musk thought he could get away with more than he actually could and/or actually got told “No” about some of his half-baked, almost certainly disastrous ideas. Musk being Musk, he took his ball and went back to Tesla.

Musk still owns his 9.2-percent stake in Twitter, but it’s clear he’s already pissed about the situation (see his above “Is Twitter dying?” pondering). The world’s wealthiest man often thinks he is playing four-dimensional chess, when in fact it’s a lot less strategic and shortsighted than that.

It’s worth reminding everyone here that Musk is not a business genius. He’s not an engineer. Hell, he’s not actually the original founder of Tesla. He’s the heir to a pre-Apartheid South African emerald mining fortune who lucked out with PayPal and bought his way into Tesla. At best, Musk has a gift for branding and marketing, which has allowed him to promise his way to the top and subsequently half-deliver on those plans.

Once again, Elon bought his way into a company he thought he could eventually subsume and make his own. It’s proving more complicated than that, and rather than compromise, he simply will resort to meme-ing his legion of fans into a frenzy while causing headaches for virtually everyone else.