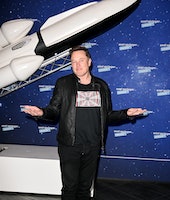 Let’s just dive right into this — two stories from yesterday for your consideration, both courtesy of CNN:

Not recurring, either, mind you. Simply as a “step up now, on a one-time basis" kind of situation, as David Beasley, director of the United Nations’ World Food Programme, put it to CNN. Given that the net worth of U.S. billionaires has essentially doubled since the pandemic began, it stands to reason that someone like Musk — or, say, addict-taunting space cowpoke Jeff Bezos — could recoup that amount within the next few weeks. We’re not tax experts, but that probably counts as a charitable write-off, too.

This won’t happen, of course; not in 255.2 billion years. Because every billionaire bastard is a living crime against humanity.

A famine of their own making — This whole exercise in financial futility is made even worse upon remembering that these same billionaires are by-and-large responsible for the world’s deterioration. Beasley cites to CNN that most of the current famine crises are directly connected to ongoing climate change issues, and while CEOs like Musk and Bezos love to tout “green” initiatives for PR optics, in reality, their companies are some of the planet’s worst offenders.

Make them pay up — Unfortunately, this is a tale as old as time: The uber-wealthy will not part with any modicum of their vast cash reserves unless legally required to do so... and even then, that can be a stretch. Increasing taxes on those who can afford it the most is one of the easiest ways to help fund much-needed initiatives and climate change reforms. If nothing else, there has to be some hefty taxes involved for wasting inordinate amounts of fuel on billionaires’ 10-minute space vacations.