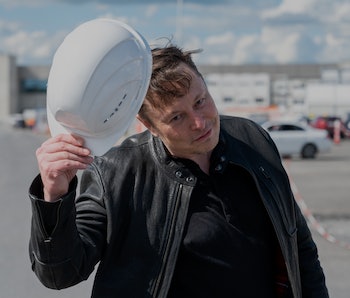 A rational person could be forgiven for thinking a gem-fortune heir whose car company founded in 2003 didn’t technically turn a profit until last year and whose most recent genius ideas include a “50’s diner” and $130,000 sports car that can play a reviled video game when it isn’t crashing into cop cars isn’t the best person to rely on for investment strategies. And yet, Elon continues his tweets... and the crypto markets continue reacting to them.

After waffling about Bitcoin’s feasibility multiple times, citing differing, logically dubious reasons, the Tesla “Technoking” publicly posted his latest contradictory take on the world’s leading cryptocurrency yesterday via Twitter, juicing the recently slouching market. Responding to a CoinTelegraph article relaying accusations of market manipulations, Musk tweeted, “This is inaccurate. Tesla only sold ~10% of holdings to confirm BTC could be liquidated easily without moving market.” Which is an absolutely ridiculous experiment made even more ridiculous by his follow-up message declaring Tesla would only accept Bitcoin payments again after “there’s confirmation of reasonable (~50%) clean energy usage by miners with positive future trend.” Uh huh.

Hiding manipulations behind marketplace necessities — It’s inarguable that Bitcoin desperately needs to transition towards clean energy mining. But for Musk to renege on Tesla’s decision to accept bitcoin less than two months after announcing the move, citing already widely known concerns about cryptocurrencies’ environmental impact, then to say his electric vehicle company’s crypto selloff (one of its only profitable moves) was simply to prove a point is reckless at best, and in all likelihood consciously manipulative.

Despite this glaring issue, Musk-loyalists and market opportunists still hang on every Technoking tweet, delegitimizing a potentially viable long-term financial alternative to the current systems in place.

But as that original CoinTelegraph article points out, because bitcoin is designed to be completely unregulated by any centralized authority, there’s very little anyone can do to put pressure on the man to change his (literal) poor man’s Joker ethos.

Ah well. Nevertheless. We guess there’s always the choice to invest in STOPELON.