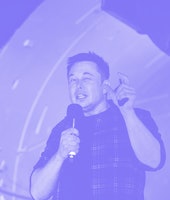 Of all the horse shit shoveled by Elon Musk, the Boring Company arguably remains his largest mound of said shoveled horse shit. The Technoking’s most diehard serfs love to forget that his transit infrastructure project’s major selling point — a next-gen network of sleds and pods capable of zooming cars and humans to destinations at breakneck speeds — currently amounts to roughly 2 miles of Tesla traffic jams underneath the Las Vegas Convention Center.

And yet, the Boring Company continues to gain traction. Fort Lauderdale wants in on the subterranean Tesla convoys, and Vegas was apparently wowed enough by what it’s seen that it also commissioned another 29 miles of autopilot mediocrity. Then there’s the company’s recent round of Series C funding — all $675 million of it. In total, the Boring Company is currently worth around $5.675 billion.

Eyes to the horizon — Despite what little the company has already delivered, the Boring PR is still going all in on promises of ridiculously fast, nonstop transit to ease metropolitan traffic congestion and lower pollution rates. “Defeating traffic is the ultimate boss battle,” Musk is quoted as saying at the beginning of the press release (no, seriously). “Even the most powerful humans in the world cannot defeat traffic.”

The Boring Company swears projects like the Vegas Loop will generate a “throughput of up to 57,000 passengers per hour,” meaning passengers can get “a trip from Harry Reid International Airport to any major destination on the Las Vegas strip in 5 minutes or less with zero stops.” We’ll believe it when we see it.

Automatic for the people — The latest series funding announcement also contained information on the Boring Company’s updated tunneling machine, Prufrock (as in, The Love Song of J. Alfred Prufrock by T.S. Eliot). The newest iteration promises to mine up to a mile of tunnel per week. “In the short term, if each Prufrock-2 mines at 1 mile/week, and TBC produces 1 new Prufrock machine per month, then TBC will be introducing 600 miles/year of capacity.”

Prufrock also promises to kill jobs. “Unlike traditional TBMs which require upwards of a dozen or more people to operate, Prufrock is designed to be capable of operating completely remotely and autonomously via computerized systems and requires zero people in the tunnel to operate.” Wonderful.

Last we checked, only 2 “Prufrocks” were used in Las Vegas. We’ll circle back here in 12 months time to see how many Prufrocks are out there, boring away.