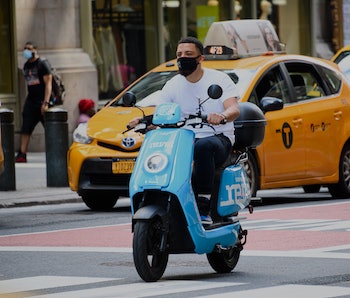 Over the past few months, Revel's electric mopeds have taken over the streets of New York City. Now the entire stint is coming to a temporary pause after two deaths took place during such rides in just 11 days, according to CNN.

The company is temporarily suspending its services, it announced on Twitter:

New York riders — starting today, NYC service will be shut down until further notice. We’re reviewing and strengthening our rider accountability and safety measures and communicating with city officials, and we look forward to serving you again in the near future.

Background — The suspension arrives after the deaths of Nina Kapur, on July 18 in Brooklyn, and Jeremy Malave on Tuesday morning in Queens. Both died while using Revel mopeds.

New York speaks up — Controversy already dogged the company as Manhattan congressman Adriano Espaillat had recently penned a letter to New York state's DMV chief Mark Schroeder. In the letter, Espaillat wrote, "Following a series of reports over the past few days, it has become clear that there are serious safety implications for Revel users, other vehicles on the road and bystanders."

Similarly, New York mayor Bill de Blasio has lambasted the company for what he called a lack of safety guidelines, NYC Streetsblog reports. "When you see an incident, a few incidents, it causes concern," the mayor stated of Revel. "This has gotten to be too much, it doesn’t work the way it’s structured. I’ve been clear with Revel — they cannot be open in this city without making this service safe and if they don’t, we won’t allow them to come back to this city at all."

What would safety look like? — Critics like Espaillat have called for a specific kind of driver's license for operating the moped. This could significantly cut rider numbers down — a reality which likely discourages Revel from getting serious about licensing practices.

For its own part, according to The New York Times, Revel will apparently require users to undergo an in-app safety assessment. Additionally, the company already gives helmets with its moped rides, so users will have to confirm if they have it over their heads. Little steps like these could help improve the quality of safety for riders in the hectic and crowded streets of New York. If not, Revel may have to leave town for good.