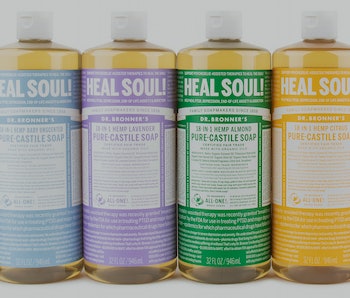 Anyone who’s ever come across a Dr. Bronner’s product at the very least got a tickle out of the wordy label. Typically extolling the magical properties of the concentrated castile soap, the labels have taken on a life of their own in recent years, from meme to not-so-subtle platform. The label has received a few changes lately and provided information about climate change, psilocybin, and most recently, psychedelic therapy.

In 2019, the company started to put its weight behind psilocybin therapy, and last week, it doubled down on its support for psychedelic-assisted therapy. Dr. Bronner’s Heal Soul! Campaign is hitting 32-ounce soap labels from October 1 through December to inform its customers about the mental health benefits of these kinds of therapies.

From magical to political — This year alone, the company has put $3 million towards ballot measures in Oregon and Washington D.C. in addition to organizations like the Multidisciplinary Association for Psychedelic Studies, Indigenous Peyote Conservation Initiative, VETS: Veterans Exploring Treatment Solutions, Inc., and the Heroic Hearts Project.

The original label ethos of “Unite the whole Human Race! For we’re All-One or None! … Exceptions eternally? Absolute None!” sprouted from founder Emanuel Bronner’s own dark life. The third-generation soapmaker wanted to foster unity after his parents were killed in the Holocaust, and the fantastical label sought to spread this gospel as well as the otherworldly properties of the soap. Folding a message into marketing has been a part of the brand for decades.

As a hemp-based product, one of Dr. Bronner’s first forays into modern politics pushed for the legalization of hemp and now calls for drug policy reform. The familiar label is most likely to be found on a Whole Foods shelf, so it’s no surprise that other political efforts relate to climate change, fair trade markets, and organic ingredients in order to protect “Spaceship Earth.”

But don’t take our word for it; learn about the company’s advocacy from Cosmic Engagement Officer himself, David Bronner:

All jokes aside — There’s a lot of New Age lingo currency associated with this company worth cringing at — thanks to its, uh, CEO — especially when you consider how much New Age philosophies appropriate from indigenous cultures. Its effort to decriminalize and even normalize the use of natural therapies, however, brings a new level of consciousness and conscience to the brand. Beyond magic mushrooms, the company donates to research surrounding peyote and ayahuasca.

You can read the full limited-edition label here.