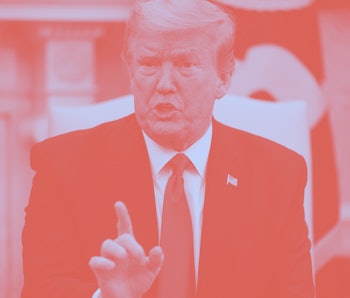 The U.S. Department of Justice is ready to propose a rollback on federal protections for internet companies, according to an official from the Trump administration. The proposal would follow the President’s executive order from a few weeks ago in attempting to force tech companies to be more accountable for the content posted on their sites.

The proposed reforms could be announced as soon as today, reports The Wall Street Journal. The legislation will aim to make websites more assertive in addressing any misconduct posted to their platforms and to be “fairer and more consistent” in their decisions to take down content from those platforms.

The DOJ doesn’t have the power to pass laws on its own, of course, so these proposals will just be that: proposals. It would need to be approved by Congress before it could become law.

Still, though, the legislation — which would make sweeping changes to Section 230 of the Communications Decency Act — could have the power to make all-encompassing changes to the way the internet writ large is policed.

Say goodbye to immunity — We’re still operating on scraps from that one official’s statement, so details are scarce. But we do know that the proposed legislation will build off Trump’s executive order while also broadening its scope.

The proposal will seek to make sweeping changes to the protections afforded to internet companies by Section 230 of the Communications Decency Act. Section 230, which has been in effect for more than two decades, essentially protects tech companies from the behavior of those who use their platforms. That keeps Twitter from facing legal action when one of its users posts something illegal or otherwise harmful.

The DOJ’s proposal would strip these protections in a wide variety of circumstances. Similar proposals have passed into law in the recent past, such as Allow States and Victims to Fight Online Sex Trafficking Act (FOSTA), which President Trump signed into law in 2018.

Moderation to the extreme — Because internet companies have, for the most part, been left to their own devices when moderating their platforms, there’s never been any standardization across different websites. Social networks have their own rules for moderation — and recently we’ve watched as those differing moderation practices have turned to all-out war between giants Facebook and Twitter.

The DOJ proposal seeks also to change all that moderation wiggle room. The proposal looks to hold platforms accountable for the content they take down and also to force companies to follow their own rules consistently. If the proposals passed into law, the federal government would take a much more hands-on approach in ensuring moderation practices are being carried out the same way across the board.

Will it pass? — The jury’s still out on that one and will be for quite some time. Though Trump’s executive order has already been challenged in federal court and online rights groups, the DOJ’s support for similar legislation does make its passing more likely.

The majority of tech experts agree that removing the protections afforded by Section 230 would deal a devastating blow to tech companies and the internet as we know it. If companies are held to extremely high standards — and are threatened with legal action if they don’t follow those rules — they’ll be forced to take a much more aggressive approach to policing their platforms.

We’re watching the nature of free speech on the internet evolve into something entirely different than what we’ve grown used to. Those changes are going to keep coming whether or not this legislation passes.