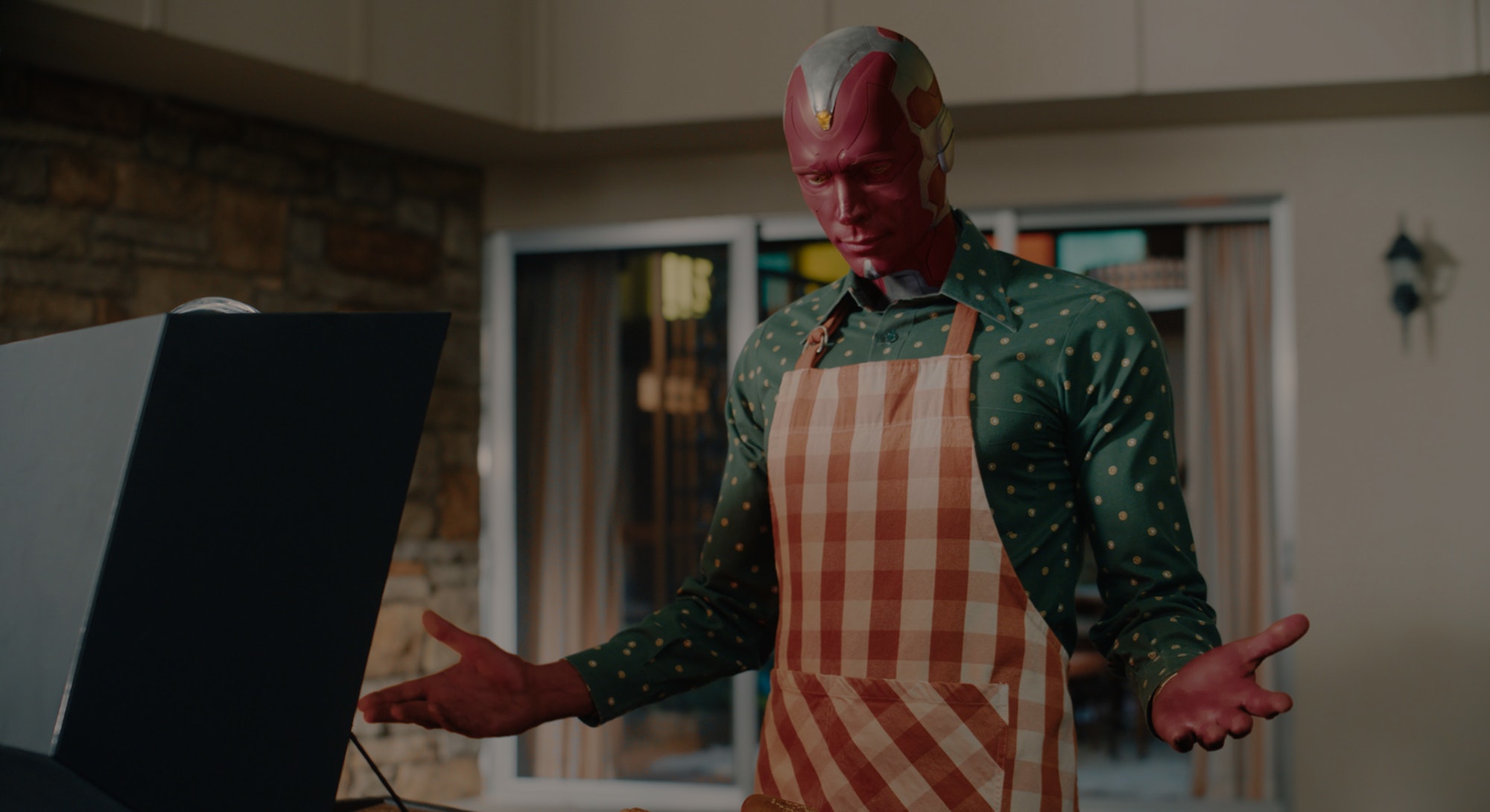 I am a sucker for any artificial intelligence, replicant, or sentient plant matter attempting to reckon with its mortality and self-awareness. Inject that Philosophy 101 shit directly into my veins.

On that score, The Vision has long been one of my favorite pop culture characters — especially Tom King’s devastating comic book miniseries from 2015. Thanks to Paul Bettany, an objectively great actor, I never really stood a chance against the Marvel machine. This is most likely why I found myself fighting back tears during WandaVision’s final minutes last weekend. (Warning: This article contains spoilers.) Not for Scarlet Witch’s catharsis, mind you, but for the Vision’s meta-lack of one.

I found myself fighting back tears not for Scarlet Witch’s catharsis... but for the Vision’s meta-lack of one.

During the show’s penultimate entry, “Previously On,” I slowly grew suspicious of the emotional reaction it was producing in me. At one point in the episode, about Wanda’s uninvited recapping of her past traumas, the audience gets an emotional reprieve via the memory of an early, pre-relationship conversation with Vision. He comforts Wanda, still mourning the death of her brother, on the nature of loss. “What is grief,” he posits, “if not love persevering?” It’s a genuinely affecting and poignant thought — and don’t let any cynics tell you otherwise.

I mean, sure. It’s easy to manipulate your audience’s emotions with a pseudo-poetry about “love” and “grief” alongside multisyllabic words like “persevering.” But still: that doesn’t make the sentiment any less truthful... or any less emotive.

In any case, our resident synthezoid’s question, along with its ensuing (and particularly online) debate on “depth vs. sophomorism,” was a perfect segue into the show’s finale. Which, between all the CGI cape battles, features a number of provoking, resonant moments for Vision. WandaVision’s central themes of trauma and grief are a compelling, and socially important, foundation for the show’s success. But, for me, its secondary character has provided the true emotional power — if not always intentionally.

Marvel Studios (and by extension the larger Disney machine) doesn’t often traffic in variables like originality or true philosophical depth. Studio execs and producers, not to mention the legion of A-listers doing PR rounds for each release, will invariably disagree, but it’s difficult to use adjectives like “weird” or “experimental” to describe a TV show that had most likely been green-lit six years ago — before its lead characters had even debuted in The Avengers: Age of Ultron. Until now, what’s been most impressive about the MCU is the amount of collective, algorithm-influenced planning going into the House of Mouse’s decades-long superhero industry. Half of the franchise’s appeal is in how it boggles our little primate brains.

WandaVision’s secondary character has provided the true emotional power — if not always intentionally.

This is where WandaVision’s Vision becomes narratively tricky. Near the series’ end, the Vision learns he isn’t the actual character from his source comics, or even past MCU films. Instead, he’s the Scarlet Witch’s memories of that character made sentient. “Wanda, I know we can’t stay like this. But before I go, I feel I must know: What am I?” Vision asks, as they stare out their suburban home window towards a fast-approaching, literal wall of death.

“You, Vision,” Wanda tells him. “You are a body of wires and blood and bone that I created. You are my sadness, and my hope. But, mostly, you are my love.” Which, c’mon. If that doesn’t make you feel something, then you’re more Ultron than human. And yet... why do I feel like there’s an asterisk next to my still aching heart?

Past the show’s premise, there isn’t anything particularly quirky, novel, or experimental in WandaVision. But we do glimpse something impressively surreal: an intellectual property channeling an awareness of its own strange, ephemeral existence via, appropriately, an AI superhero. “I’m not the true Vision. Only a conditional Vision,” the character reasons earlier in the finale. He then launches into debating himself about the Ship of Theseus, a popular ontological thought experiment exploring at what point an object or individual ceases to be itself.

This is the CliffsNotes version: If you gradually replaced every piece of a ship would the resultant ship be the same ship? If not, at what point would it stop being the original ship? And what if you took all the replaced parts and assembled them into another ship, which would be the original?

While WandaVision’s resident Vision debates a (more) robotic doppelgänger, they eventually conclude that “Neither is the true ship. Both are the true ship.” Our main Vision later adds that he doesn’t possess “one single ounce of original material” — something truer than the fictional character, his reconstructed memory, or the human writers behind the entire WandaVision endeavor probably intended.

“I have been a voice with no body, a body but not human, and now a memory made real. Who knows what I might be next?” Vision wonders right before his (latest) death. Can’t the same be said of our emotional responses to pop culture in the Age of Algorithm? After a decade inundated by industry’s most extensive, and financially successful, franchise — simultaneously staring down our fast-approaching content singularity — our interactions have become so filtered and refracted through the lenses of multitiered IPs that it’s difficult to trust our emotional reactions.

Was I reacting to an earned payoff from years of meticulously planned storytelling? Or algorithmically-influenced manipulation of feelings?

When I swore to my girlfriend sitting next to me on the couch that, no, of course I wasn’t crying during a Marvel show... what exactly was I reacting to? Was it the earned payoff from years of meticulously planned storytelling? My own memory of The Vision from my beloved comic books? An algorithmically-influenced manipulation of feelings?

“I don’t need you to tell me who I am,” Wanda declares to the show’s delightful villain, Agatha Harkness, during her series’ defining moment of self-actualization. To which I say a resounding good for her. Meanwhile I, like Vision, am still feeling pretty lost about it all. Maybe I’ll find some clarity — that is, if Vision’s inevitable return can contain at least “one single ounce of original material.”