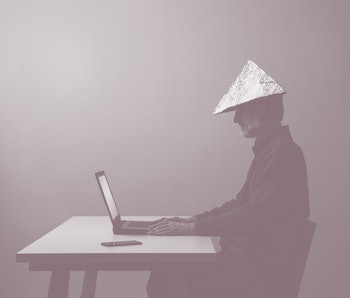 Google says it’s removed three apps related to the QAnon conspiracy theory from its Play Store, Media Matters reports. The three apps have been listed on the Android marketplace for months now, according to the report.

The apps in question — QMap, Q Alerts!, and Q Alerts LITE — all sent users notifications when “Q,” the mysterious figure central to the conspiracy theory, released new information. Google has now decided that the apps violate its policies on harmful information.

Google confirmed the takedown to Media Matters. “When we find apps that violate Play policy by distributing misleading or harmful information, we remove them from the store,” the company said in a statement.

First reported in March — However, Google was alerted to the existence of the apps by Media Matters back in March, but it didn't receive a response from the tech giant. The apps were not removed at that time. Media Matters first penned a report about the apps in February, citing Google’s prohibiting of apps with “content related to terrorism, such as content that promotes terrorist acts, incites violence, or celebrates terrorist attacks.”

Google’s often lax monitoring of its Play Store is continually problematic, leaving apps that go directly against its policies available for download. What use are those policies at all when they’re not being enforced?

Remind me what QAnon is again? — This is a deep, dark rabbit hole that’s better left (mostly) unexplored. A basic understanding, though, is necessary for understanding the hazardous consequences of Google’s inaction on the subject up until this point.

QAnon is a far-right conspiracy theory with a rapidly expanding base of believers. On a basic level, the conspiracy outlines a supposed network of opposition to the Trump administration. But it goes much deeper than that: there are allegations of child sex-trafficking, Satan-worshipping, and planned coups d'état.

This recent deep-dive from The Atlantic does a fantastic job of explaining the theory’s origins and consequences if you want all the wildly chaotic details.

Dangerous in very real ways — Despite its extremely tenuous ties to reality, QAnon has very real, sometimes dire consequences. The QAnon conspiracy theory has been tied to multiple violent incidents and many other threats of violence.

Last year, one proud QAnon supporter allegedly murdered his brother with a sword, while another shot and killed a crime boss leader in an attempt to protect President Trump. Those are just two examples.

Google is enabling conspiracists — Google has fairly strict policies in place that are meant to protect users from harmful misinformation. It’s becoming increasingly obvious that the actual enforcement of those policies more often than not falls by the wayside. And by doing so the company is giving misinformation a massive boost. Google is notoriously bad at policing the Play Store. Sometimes this takes the relatively harmless form of apps with disruptive ads being available for download. But other instances are more explicitly dangerous, like the banning of Alex Jones’ Infowars that took way too long.

While Google has certainly taken a stand against misinformation spreading on its platforms, the company’s inability to take down even the most obvious of conspiracy theory apps is disappointing, to say the least. Especially when the apps were deliberately brought to the company's attention months ago.

In that time, the three apps have doubtless been downloaded many times over by Android users. As Media Matters notes, there are still other QAnon-related apps available on the Play Store right now. Google needs to dedicate more resources to identifying and removing these sorts of apps. Failing to do so could be deadly.