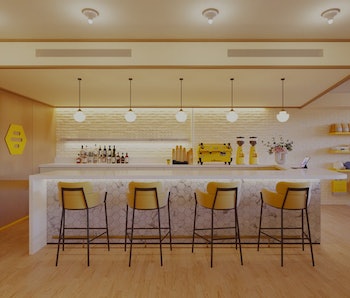 Bumble matches in New York City struggling to come up with a first date spot now have an app-related option: Bumble Brew, a new brick-and-mortar “cafe and restaurant” opening in the Nolita neighborhood downtown on Kenmare Street.

Originally announced in 2019 before being waylaid by the COVID-19 pandemic, Bumble Brew has gotten a mission statement overhaul courtesy of a partnership Delicious Hospitality Group’s Pasquale Jones. While the locale was first advertised as a “date-friendly” spot with no “awkward” or messy food offerings like sauce-heavy pastas or hot wings (c’mon, where was the fun in that?), Bumble’s physical shop has been rebranded as a “safe space for healthy and equitable relationships and connections,” Bumble’s head of brand partnerships, Julia Smith, told Bloomberg today.

Initially opening July 24 for breakfast only — ricotta with bee pollen and plums, and wild greens with a runny egg are given as menu examples, ooh la la — before expanding to include lunch and dinner in the following weeks. Ryan Murphy, the head chef at Pasquale Jones in charge of Bumble Brew’s menu, also mentioned including an “ambitious coffee program,” although we aren’t quite sure what that would entail. Gigantic mugs? Coffee roasters who hope to one day brew a cup on the moon? Cryptocoffee?

Anyway, we look forward to seeing what kinds of dating app couples decide to meet up at ostensibly a dating app-themed cafe.

Bumble’s big bet — It certainly sounds like the dating app company is confident its newest venture will be a success, given both its location and size. According to Bloomberg’s report, Bumble Brew’s space will include an 80-seat dining area, patio seating, cocktail bar, and private dining areas, as well. Bumble execs also note that the restaurant will soon host events and seminars similar to the ones at Bumble Brew’s pop-up originator, Bumble Hive. For now, however, the plan is to stick with just the single NYC location, although Bumble PR hints that Austin might be next up for an expansion.

Unclear what Bumble’s ‘safe space’ will entail — It’s great to hear the dating app company promoting a safe and inclusive real-world space at Bumble Brew, but at the moment it seems like details are a bit vague on what that exactly means. Recently, the app moved to include “body-shaming” repercussions for abusive users, but there’s no word on what strategies the company will employ at its restaurant, other than standard “don’t be a dick” protocols. But hey, more openly advertised spots like that are never a bad thing.