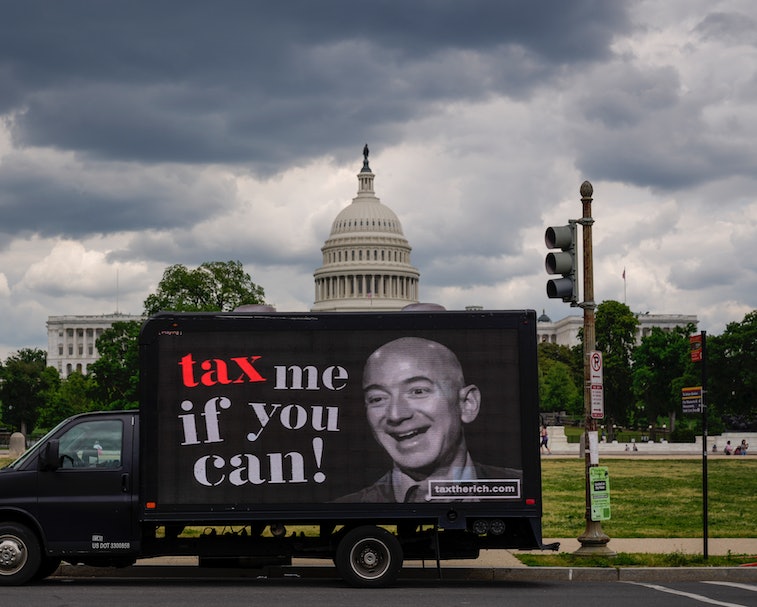 The exposé, which was built off of leaked IRS documents, comes at a time when the United States is turning the corner on a pandemic that saw millions lose their jobs — and their homes — while billionaires added a staggering $1.2 trillion to their collective fortunes.

Pandemic hell — None of the findings are terribly surprising to anyone who’s been following the reality of rising inequality in the United States. But they’re bound to make people angry. They show how you can benefit from all of America’s opportunities and then stop paying into the system once you’ve become rich enough.

Taxes are supposed to be something that everyone pays into for the collective good. They pay for the roads that Amazon uses to deliver packages, and the public schools that educate the least fortunate, things intended to give everyone a fair shot at realizing the American Dream. But as the report shows, instead of paying more as they get wealthier, the ultrarich pay paltry sums and justify it by claiming they pay their share in corporate taxes, or that they shouldn’t be held responsible for exploiting the loopholes in the current system.

Too easy — The biggest way the rich are able to avoid vast sums of taxes that ProPublica highlights is a loophole in the law that doesn’t impose a tax on wealth that’s “unrealized.” What that means is if you hold shares in Amazon and they increase in value one year by $100, you don’t pay taxes on that until you actually sell the shares and cash hits your bank account. So billionaires including Amazon’s Jeff Bezos and Tesla’s Elon Musk might only take annual incomes of $80,000-100,000 per year, but their wealth increases by billions of dollars because most of their actual compensation is in the form of stock they never sell.

You may be wondering, how then do billionaires fund their lavish lifestyles? Easy: they take out bank loans and use their stockholding as collateral. Whereas the tax rate on the wealthiest Americans is 37 percent, a bank loan for a person like Bezos could have an interest rate in the small single digits and no tax, since loans have to be repaid and thus aren’t considered income.

In 2007, Jeff Bezos didn’t pay any federal income taxes despite being a multibillionaire, whereas the average household earned $70,000 and paid an effective income tax rate of 14 percent.

One more data point from ProPublica piece that’s worth highlighting:

Our analysis of tax data for the 25 richest Americans quantifies just how unfair the system has become.

For comparison, it would take 14.3 million ordinary American wage earners put together to equal that same amount of wealth.

The bill for the wage earners: $143 billion.

Job creators mentality — Add to this how major multinational corporations are themselves able to pay low taxes by funneling profits through offshore shell companies, and it becomes hard to argue that billionaires “deserve” to pay low income taxes because they’re contributing to society in other ways.

The idea that Bezos created entirely new jobs at Amazon assumes that its workers would have otherwise been sitting idly unemployed. But they surely would have been working somewhere else if Amazon weren’t around — somewhere perhaps with better pay and benefits.

It might not have created inequalities that exist today, but Amazon benefits from the fact that its warehouse workers don’t have better options, options that might be accessible to them if the United States had better social services. Bezos’ wealth is coming from somewhere, and that somewhere is arguably workers and the country.

If you’re rich, you have it easy in America today. You can live in a “good” neighborhood, pay costly medical bills, and enjoy the benefits of cheap labor. Being poor in this country, meanwhile, is incredibly hard to dig your way out of, with many people one or two paychecks away from turmoil. It’s all too obvious that these are interconnected issues. At some point, there’s going to have to be collective action to change this.

Read the full report at ProPublica.