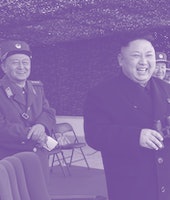 The estimated decrease in value for just one of North Korea's stolen crypto caches.

Even some of the most stalwart cryptocurrency true believers are questioning their faith in recent months as valuations across the entire market have plummeted from the past year’s all-time highs. But while many are lamenting their losses, few are hurting as much as *checks notes* Kim Jong-Un, apparently.

Reuters reports that North Korea’s massive crypto hauls from various hacks and heists in recent years are now worth staggeringly less than their initial numbers, something which poses a huge problem for a country whose stolen funds largely finance its nuclear and military programs. One massive theft earlier this year, for example, has decreased by somewhere between 80 and 85 percent in value, to just under $10 million. Sure, that’s objectively still a lot of money... but not when you already sunk $620 million this year alone into your missile and rocketry developments.

It all lends a dark bit of irony to that “To the moon!” callback, doesn’t it?

Unlikely to deter them — Despite the “crypto winter” dramatically kneecapping North Korea’s military spending, experts indicate that it’s unlikely to deter the country from continuing its online crimes. “Pyongyang has added cryptocurrency into its sanctions evasion and money laundering calculus and this will likely remain a permanent target," one analyst told Reuters.

It makes sense, given just how isolated North Korea is from the rest of the world. As it stands, there are very few avenues for the government to generate any kind of income other than illicit activities like cryptocurrency scams and hacks. Even if Bitcoin is down over 50-percent right now, there is still a lot of money in the crypto world — money that can be easily exploited with little repercussion, as we see time and again. North Korea certainly knows this, and doesn’t plan on changing up strategies anytime soon.