COVID has highlighted just how bad the digital divide really is 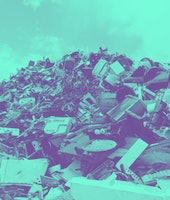 How far electronics sales fell in "low and middle-income countries" during the pandemic.

A new report released today by United Nations University and the UN Institute for Training and Research used 2020’s first three quarters to estimate that the COVID-19 will eventually cause global e-waste to fall as much as 6.4% when compared to pre-pandemic numbers. But the sizable reduction, although environmentally positive, was anything but fair to middle- and low-income countries already experiencing deep digital disparities when compared to their first-world counterparts.

“The so-called digital divide is increasing,” Dr. Ruediger Kuehr explained in an official press release. “The ability to adapt to digitisation and earn a living or simply to own and benefit from electronics is decreasing in some parts of the world.” In regions like Sub-Saharan Africa and Central Asia, electronics purchases fell as much as 30% during the first three quarters of 2020, compared to just 5% in nations such as the United States.

Dr. Kuehr also added that the pandemic further revealed the stark economic stratification occurring in wealthier countries like here in the U.S. Meanwhile, Big Tech continues to profit. Because that’s the system we’ve allowed to flourish.

It all comes down (once again) to privilege — The UN University’s latest report highlights the almost unfathomable differences between the Have’s and Have-Not’s of the world. Although undoubtedly hit by massive economic consequences, most in relatively privileged societies successfully turned to electronics for both entertainment and work solutions during the COVID-19 quarantine. In contrast, the impoverished both at home and abroad simply couldn’t afford these digital-based alternatives, and have subsequently suffered.

According to the report, data for North America and Europe depicted “a mildly fluctuating but upward trend in consumption in 2018 and 2019” before a decrease during 2020’s first two, pandemic-affected quarters. The third quarter of 2020, however, had even higher consumption rates than its previous year’s equivalent. In areas like North Africa, that downward trend continued for all three economic quarters.

Profiting amidst the poverty — Although companies like Nintendo and Amazon raked in record profits this past year, the report reminds readers that over half a billion people experienced reduced work hours or job losses during the pandemic, with women affected over twice as much as men.

Similarly, those in low-income nations saw a 23% reduction in working hours “causing social disasters, as people fall into debt, skip meals, and keep their children home from school.” Although the UN University’s report isn’t wholly surprising, it is still quite the gut-punch to see the numbers laid out this starkly. It’s certainly something to keep in mind as you eagerly wait for your iOS 15 beta update.