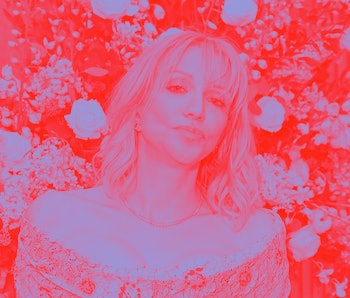 Elon Musk doesn’t like paying his fair share to the country that continually allows him to play with his toy rockets and cars in its backyard. Instead, he enjoys dangling free lunches over the heads of poor people for reasons he can’t even properly articulate.

Courtney Love has no real connection to Elon Musk that we know of but, like us, she has watched him be an online troll for quite some time. Unlike us, however, she claims to have a direct line to his inner circle of tech bros, and just threatened to post some presumably unsavory email correspondences between all of them if Musk doesn’t pay an adequate amount of federal taxes.

We all eagerly await the Technoking’s response.

Leave Bernie alone — Love seems to have taken particular umbrage at Musk’s juvenile quip about Bernie Sanders’ age from a couple of weeks back, which came in response to the senator tweeting a pretty understandable request for “the extremely wealthy to pay their fair share.”

“[Y]ou know your st8, male, PayPal mafia email group?” Love tweeted to Musk yesterday afternoon, referring to the cadre of dudes (including the Technoking) who made an absolute fortune off of the commerce company in the early 2000s. “I was on bcc for MONTHS on that thing... With that information in mind, don’t you think in a ‘civilized society’ one should embrace paying our fair share of tax?” She also concluded with telling Musk to quit messing with Sanders, calling it some real “Kendall Roy shit,” which is a phrase we wish we thought of ourselves.

Love connections — We can only begin to imagine the kinds of horrid things said by a group of billionaire white bros under an assumed veil of privacy, so threatening that kind of email doxx to Musk is probably a pretty safe way to ruffle his feathers. That said, it’s anyone’s guess as to how Courtney Love, of all people, became BCC’ed on the supposed message chain. We tried in vain to find some kind of connection between the Gen X queen and any of the dudes associated with the PayPay Mafia, but we’ve so far come up short. In any case, we’ll be watching to see if Elon takes the bait. We reached out to Love for a comment, but she hadn’t responded at the time of writing this article.

Believe us, we will definitely keep you posted on this odd turn of events.