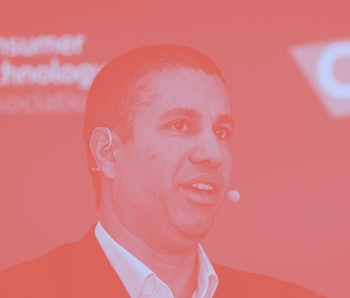 Federal Communications Commission (FCC) chairman Ajit Pai has introduced a new measure called the Keep Americans Connected Pledge, with the aim of ensuring that everyone has access to reliable broadband service at home amid the coronavirus outbreak. Health officials are advising people to isolate themselves at home as much as possible in order to mitigate spread of the virus.

The FCC's pledge, which will remain in place for the next 60 days, asks that companies do not terminate internet service, and waive any late fees incurred due to the economic effects of the virus. It also asks that internet providers suspend data caps and not charge overage fees, as many employers are instituting mandatory work-from-home policies that will inevitably cause a spike in home internet usage.

Pai says that most major broadband companies in the U.S. have already committed to the pledge, including AT&T, Charter, CenturyLink, and Comcast, among others. Some of these providers were already responding to coronavirus before the pledge was released — Comcast, for instance, said it would be raising internet speeds for customers on its plan designed for low-income families from the original 15 Mbps up to 25 Mbps. AT&T, meanwhile, earlier suspended the data caps that saw it charge $10 for every additional 50 gigabytes used.

The price gouging will return — Our only complaint with Pai's pledge is that it's in effect for just 60 days. We understand its a temporary measure that'll likely be reassessed down the line. But we also can't help but feel its a tacit concession that service charges are overinflated the rest of the time. Practically every broadband provider has made claims that data caps are necessary because they wouldn't have enough capacity otherwise, but suddenly they're managing. Is it possible that internet providers actually charge data overage fees out of a thirst for profits, and because they can?

“As the coronavirus outbreak spreads and causes a series of disruptions to the economic, educational, medical, and civic life of our country, it is imperative that Americans stay connected. Broadband will enable them to communicate with their loved ones and doctors, telework, ensure their children can engage in remote learning, and — importantly — take part in the ‘social distancing’ that will be so critical to limiting the spread of this novel coronavirus,” Pai said in a statement.

The irony — It sounds like Pai is admitting that the internet is a public utility that people need, like water and electricity. Maybe if it were regulated by the government as a utility we wouldn't be begging companies to voluntarily sign a pledge out of the kindness of their hearts. Oh but wait, Pai killed net neutrality rules because he decided the internet is a discretionary "service" rather than a necessary utility. Did he just admit he's wrong here? We'll be watching closely when day 61 rolls around.