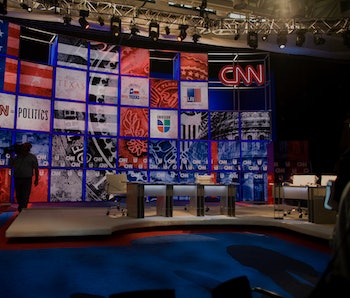 After more than three decades of cable broadcasts, CNN is going digital. The popular news network is making preparations for an internet-based subscription service called “CNN+,” with eight to twelve hours of live programming each day. CNN will join the now-plentiful ranks of traditional media companies who have entered the digital age by simply adding a plus sign to their names.

CNN says it’s hiring “hundreds of people” and “developing dozens of programs” for the service, which will officially launch sometime in early 2022.

WarnerMedia and CNN executives are very pleased with themselves for coming up with this idea. Chief digital officer Andrew Morse said CNN+ is “the most important launch for CNN since Ted Turner launched the network in June of 1980.”

Much about the new streaming network is still unclear, including how much fans of the news network will need to pay for the service, though CNN has said it will not be launching with an ad-supported tier. The company also has yet to really sell the public on why it should buy into CNN+, which for the most part is sounding… exactly like a traditional cable news channel. Just, you know, more expensive.

The same but different — As its name suggests, CNN+ will not just be CNN. It will be CNN plus… something. What that “something” is, remains to be seen.

CNN+’s live news broadcasts will be entirely separate from the cable broadcasts. The company isn’t allowed to stream its current broadcasts online because of its many long-term bundled deals with cable distributors — but the company has also noticed its cable viewership going down in recent years as people ditch their cable packages in favor of streaming services.

It seems likely CNN+ will mostly target those who don’t have access to the traditional news network, but it’s also set to include some original programming and something CNN is calling an “interactive community,” which sounds more like a threat than a selling point.

Who is this for? — Morse, who will serve as the head of the new service, says CNN+ will be “very different from anything else on the marketplace.” He did not expand upon this thought, though, leaving us to use our own imaginations to fill in the gaps. We’re struggling to do so, really — based on the information we’ve been given thus far, CNN+ actually sounds exactly like everything else on the marketplace, and a whole lot like CNN as we already know it.

CNN is right on one count: it’s losing business to the cord-cutting movement. But its solution — a standalone subscription service — probably isn’t the best answer to that business problem. The majority of people ditching cable fall into younger generational categories, but these same people don’t miss CNN. They get their news from Twitter and Facebook and various websites. In this regard, CNN+ really misses the mark.

CNN+ could find an audience by launching as a bundle with another popular streaming service; this is, after all, how the news network has reached millions of cable viewers over the last few decades. HBO Max, which is also owned by WarnerMedia, would be a great candidate for this kind of deal.

But Morse has thrown this idea out entirely. To which we say: good luck with that.