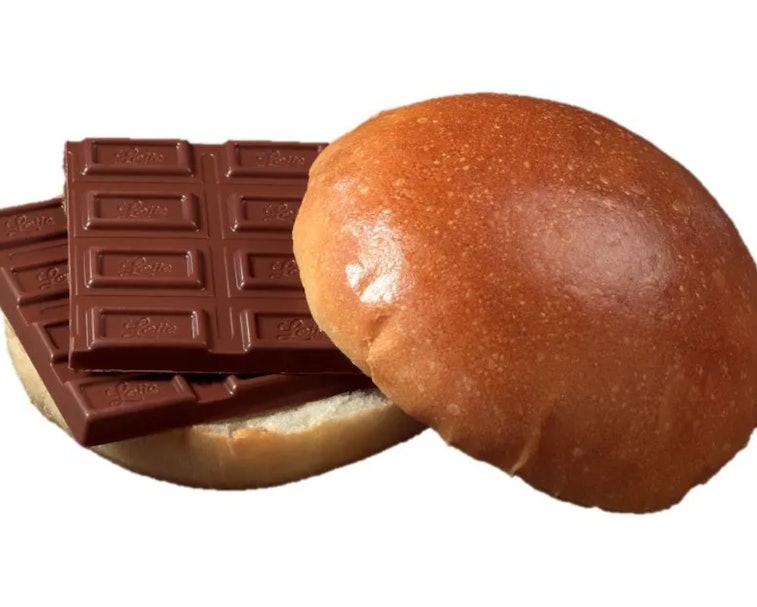 With Valentine’s Day right around the corner, we’re all looking for creative ways to celebrate. One Japanese fast food chain has quickly won our hearts for its new menu item for the holiday: a chocolate burger. No, not a beef patty topped with chocolate sauce or anything like that. Just two bricks of chocolate stuck between halves of a bun.

The geniuses at Lotteria have done just that. The South Korean fast food chain has created a chocolate burger (choko baagaa (チョコバーガー) in Japanese) that is probably the most depressing/incredible take on a Valentine’s Day meal we’ve ever seen.

As Kotatku points out, the burger doesn’t even come assembled. You’ll just receive a sliced bun and a bunch of chocolate. It’s a DIY project of sorts.

Surely many of you are thinking: But why would I pay for this sad excuse for a burger when the employees won’t even assemble it for me? Well, because it’s incredibly funny, that’s why. And it probably wouldn’t taste half-bad, either.

Thank you, Lotteria — Here’s the thing about Valentine’s Day: a large number of people take the holiday very seriously. What began as a Christian feast holiday has, in the last hundred years or so, turned into a capitalism-driven parody of love. (No shade to those who enjoy buying their loved ones flowers or chocolate, of course, but the hype around February 14 can be a tad overwhelming.)

This tendency toward spending money in the name of love can feel flimsy and exhausting. There’s just so much pressure put on this random day.

So when someone takes modern V-Day tropes and turns them into something a little tongue-in-cheek, it’s certainly cause for celebration. Chocolate and bougie dinners are two of the holiday’s truest staples; flipping those symbols on their head is just perfect.

Give us the chocolate burger — Okay, so the chocolate burger isn’t perfect. It’s only available at three locations, for one thing, and only 214 (February 14th — get it?) are available at each. And you’ll have to retweet a promotional tweet from the chain’s official Twitter account to cop one. As far as limited-edition promos go, this process really isn’t all that difficult.

If you really want to treat yourself (or a loved one) next weekend, Lotteria is also offering hot chocolate with special heart-shaped marshmallows.