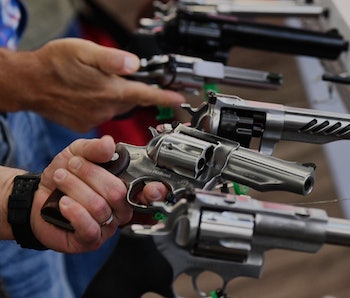 UPDATE: This article has been updated to reflect a statement from the California DOJ admitting the data exposure was the result of an internal error.

Every California resident owning a concealed carry weapons permit just had their names, addresses, ages, and license types exposed following an attempted rollout of the state’s “2022 Firearms Dashboard Portal,” according to an official statement yesterday from the Fresno County Sheriff’s Office. What’s more: a subsequent confirmation from the California Department of Justice makes it clear that the data leak was the result of an internal screwup, and not the fault of external bad actors.

While the portal was intended as a public resource, individuals’ identifying information should not have been accessible — unfortunately, it seems the state’s Department of Justice project accomplished the exact opposite of its intention.

In a statement, California Attorney General Rob Bonta confirmed the issue was a completely avoidable mistake. “This unauthorized release of personal information is unacceptable and falls far short of my expectations for this department,” said Bonta, adding: “I immediately launched an investigation into how this occurred at the California Department of Justice and will take strong corrective measures where necessary... I am deeply disturbed and angered.”

Never read the comments — It’s currently unclear how many people could be actually affected by the leak. “After learning of the breach, the DOJ pulled down the dashboard site along with all related links. However, portions of private information may have been posted on social media websites. Officials say the data was publicly accessible for “less than 24 hours.”

Predictably, the Fresno Sheriff’s Office Facebook post contains a comments section that will make your skin crawl. While most people are understandably angry at having such detailed personal info tied to firearms made available to complete strangers, their proposed solutions range from absolutely unhinged to borderline parody.

“Precisely why there should never be any lists of gun owners,” one commenter asserted, with another explaining that they “wouldn't be surprised if some in our gov't is behind it. Anything to try for more gun control.”

Regardless, the data snafu comes at one of gun rights’ most heated moments in recent memory. Having a massive state agency like California’s DOJ botch such a sensitive project is the last thing anyone needed right now — or really ever.