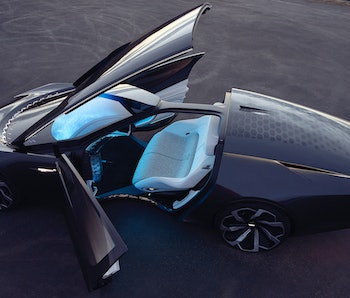 Automakers’ concept vehicles are often a double-edged sword. On the one hand, they can be pretty badass to behold, and allow automotive designers to let their imaginations really run wild. On the other hand, they almost always remain “concepts,” and rarely ever make it out on the open road.

To be honest, we’re not sure whether or not we want Cadillac’s latest concept car — showcased as part of CES 2022 — to make it to production, but we’re definitely sure of one thing: Their new, futuristic EV looks like a big ol’ space bug. And you know what? Screw it, let’s fill the roads with these things. Cadillac Creepy Crawler Cars for everyone!

Luxury brand ridiculousness — What you see before you is the Cadillac InnerSpace, the third entry into the company’s ongoing Halo Concept Portfolio which already includes last year’s big fancy bus van (SocialSpace) and small, fancy flying car (PersonalSpace). Like its forebears, the InnerSpace sounds and looks utterly ridiculous in simultaneously the best and worst ways.

Extremely buggy — The two-seater concept car also boasts two standard-hinge doors, along with a roof that opens up vertically to allow entering and exiting. When closed, the ceiling’s panoramic glass roof and sides allow for “almost unimpeded views,” which we imagine will come in handy for gawking at all the peasant commuters you pass by on the road.

Still, we can’t help but think the entire shape and feel of the Cadillac InnerSpace gives off interstellar insect vibes. This is a car for the future, though, so perhaps it was made with cockroach clientele in mind. They’ll be the only ones left after eco-collapse and nuclear war, after all.